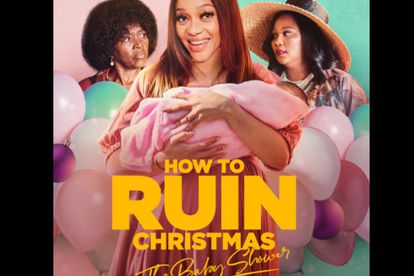 Netflix released the official trailer for season three of How to Ruin Christmas titled The Baby Shower on Monday 21 November.

ALSO READ: ‘How to Ruin Christmas: The Baby Shower’ release date and more

NETFLIX DROPS TRAILER FOR ‘HOW TO RUIN CHRISTMAS: THE BABY SHOWER’

It’s the traditional gogo versus the glam gogo as matriarchs Valencia (Charmaine Mtinta) and Dineo (Clementine Mosimane) battle it out for the title of the century: South Africa’s favourite nkhono.

In the latest installment of How To Ruin Christmas: The Baby Shower  the stage is set for yet another Twala-Sello family feud. The two families “unite” in hosting a baby shower to welcome their bundle of joy from first-time parents Beauty (Thando Thabethe) and Sbu Twala (Sandile Mahlangu)

However, this results in a chaotic Christmas.  =Zama’s (Denise Zimba-Schlitig) sudden arrival serves to bring more mayhem. The threequel premieres on Netflix on 9 December 2022.

ALSO READ: Tweeps react to ‘How To Ruin Christmas: The Baby Shower’

WATCH THE ‘HOW TO RUIN CHRISTMAS: THE BABY SHOWER’ TRAILER HERE

So, what can you expect this season?

“After two drama-filled Christmases, the Sellos and Twalas are relieved to finally not be spending Christmas together. But with Beauty one month away from expecting her first child, the families are forced to come together for her baby shower. What is meant to be a fun, harmless day for Beauty turns into an all-out war between Valencia and Dineo. With Beauty believing that Christmas is officially cursed, Valencia and Dineo have to put their differences aside and save Christmas for the sake of their children,” reads the synopsis.

ALSO READ: RIP Busi Lurayi: Five things to know about the ‘How to Ruin Christmas’ star