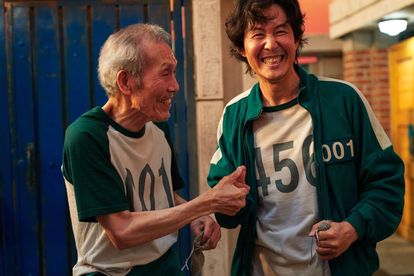 A real-life ‘Squid Game’ is here and South Africans can apply! Image via Twitter @squidgame

A real-life ‘Squid Game’ is here and South Africans can apply! Image via Twitter @squidgame

When it was released in September 2021, Netflix’s Korean drama, Squid Games sent shockwaves across the globe. On its debut, the hit series reached 82 million households and inspired Halloween outfits, music and playground games.

According to Variety, a Squid Game reality series has been green-lit and a casting call has officially been sent out. Contestants will go through a series of challenges to compete for $4.56 million (R72 million).

As per Variety, Netflix’s head of global TV, Bela Bajaria announced at the Banff World Media Festival in Canada on Tuesday 14 June, that Squid Game: The Challenge is on the way.

456 contestants will test their strategies and alliances in a number of games from the original show, including new games for the R72 million prize.

“Squid Game took the world by storm with Director Hwang [Dong-hyuk]’s captivating story and ironic imagery. We’re grateful for his support as turn the fictional world into reality in this massive competition and social experiment,” said Netflix’s vice president of unscripted and documentary series, Brandon Riegg.

Although Netflix is home to several other major reality series, Squid Game: The Challenge has officially been named “the biggest competition series ever”.

“Fans of the drama series are in for a fascinating and unpredictable journey as our 456 real-world contestants navigate the biggest competition series ever, full of tension and twists, with the biggest cash prize at the end.”

The series is set to be 10 episodes and casting for the series is already open to English-speaking people including South Africans.

Anyone interested in applying for the upcoming reality series must be 21 years old at the time and must be available for filming for four weeks in early 2023.

Other requirements include a valid passport and a one-minute video explaining why you should be a part of the show!