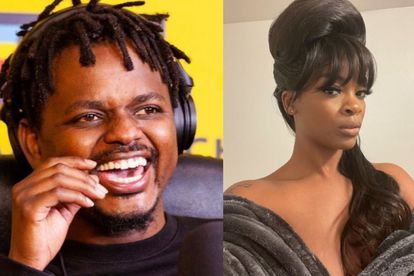 Mzansi is slamming MacG for asking United States singer Ari Lennox an intrusive question during her interview on Podcast and Chill.

The podcast hosted the American singer Ari Lennox who is the second guest on the popular show this year.

Africa’s number one podcast – Podcast and Chill with MacG is trending for its recent interview with American singer – Ari Lennox.

Tweeps are responding to MacG’s ‘nasty’ question to Ari Lennox in the interview which the Chillers think has offended the singer.

MacG had a sit-in interview to talk about her career and a variety of other topics.

The podcaster asked the singer “is someone f*cking you good right now’ WTF” within two minutes into the interview.

Lennox was shocked by the question, seemed quite offended, and tried to ignore the question.

MacG defended himself by saying he was simply quoting her lyrics from her song.

The singer said the above in her song, and she also remembered which song it was.

Lennox is the first female artist to be signed to J. Cole’s record label, Dreamville Records, and gained recognition after the release of her first EP Pho on the label.

Also read:After a controversial 2021, ‘Podcast and Chill with MacG’ returns

“Less than 2 minutes in, MacG to Ari ‘is someone f*cking you good right now’ WTF”

“Where was Sol? he would’ve been shaking his head.”

“Sexual what?? Are you sexual harassment analyzer now? You Twitter activists.”

“When a man says them but not when a woman uses them, double standards from Twitter women.”

“Why would he ask her that unprovoked?”

“She was uncomfortable with the manner he did it, so if you can’t see a problem after someone clearly shows.”

“They are uncomfortable with what u said, really need to evaluate yourself.”

Also read:‘Aneva!’ Cassper Nyovest on sitting down with MacG for ‘Podcast and Chill’