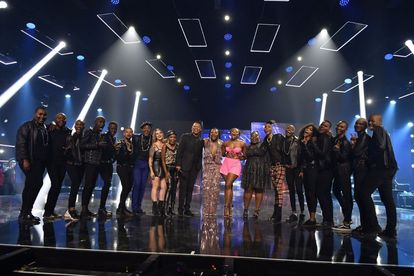 South Africa is a little bit closer to finding out who the winner of Idols SA season 17 will be, as the competition heats up. The top five performed two songs each on Sunday 24 October and to celebrate Pride Month, they teamed up with Mzansi Gay Choir who have become regulars on the Idols SA stage.

One song was a South African hit they had to strip down and the second was a song with the Mzansi Gay Choir. With only three weeks left to go until the finale, the contestants did not hold back.

Multi-talented entertainer Khaya Dlala sat in the guest judge’s chair and looked dazzling as ever.

Karabo was the first top five contestant to take the stage and started the show strong with an emotional performance of Amanda Black’s Thandwa Ndim. Unathi was left emotional after the performance and complimented her for taking the judge’s advice week after week. “Thank you for being you,” said Unathi.

Unfortunately, her performance of Tina Turner’s hit River Deep Mountain High by Tina Turner didn’t quite hit the mark for the judges.

THE COMPETITION HEATS UP

The judges loved S’22kile’s performance of Bucie’s house hit Easy To Love noting that it was her best performance to date. S’22kile’s second performance left Randall unsatisfied while Unathi and Khaya loved every second of it.

31-year-old Berry performed Craig Lucas’ Happy and Lady Gaga’s Edge of Glory and she received compliments from all three judges for both performances. Randall praised her song choices.

HAVE THE JUDGES CHOSEN A FAVOURITE?

Kevin performed Afrotracktion’s Mnike and Unathi said she could not fault his performance but it was his performance with the Mzansi Gay Choir that proved he was a powerful competitor. His rendition of George Michael’s As blew the judges away and Khaya was ready to give him the title of South African Idols.

On all the performances, Unathi complimented the top five on their growth.

“I don’t know who is going to be 2021’s Idols SA winner – but all I can say is that they are all already winners.”

Next Sunday one of the top five contestants will go home, but who will it be?