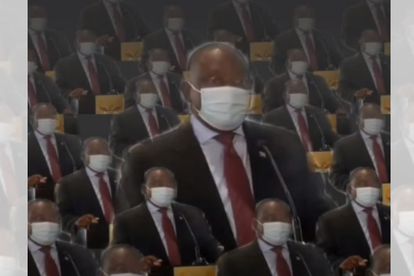 After the When People Zol creator Max Hurrell and The Kiffness both cracked their knuckles by releasing parodies of the moment when President Cyril Ramaphosa’s iPad mysteriously disappeared on live television, many social media users also took up the challenge.

It seems social media users had a blast with the funny moment. The whole ordeal happened during a briefing from the president at the Cape Town Port which was subsequently delayed as he found that his iPad had gone missing.

“I’m waiting for my iPad, somebody stole it,” said Ramaphosa as he stood at the podium having been introduced. Somebody decided that they want to dispossess me of my iPad, so, I want that,” continued the President. “Can I have my iPad, please. So, they stole it.”

“I love Our President @CyrilRamaphosa ???? Last year he gave us the mask and this year – the remix includes an iPad with the mask,” said another.

That’s why BeatsByHand also uploaded their own remix – a remix of which many are requesting an extended version.

Other believe that Carl Niehaus’ TikTok to Cyril’s missing iPad may be the best one yet.

The iPad is safe and sound

Luckily, Ramaphosa did eventually get his iPad back, but resolved to never leave his gadget unattended again.

“Do you know where they took my iPad to,” asked an expectant Ramaphosa. “This is the problem of always handing out your gadgets to other people. It’s always best that I should keep all these things with me.”

Eventually, the President sat down while people located the device. When the iPad was found, Ramaphosa was reintroduced and made the speech, with his device in hand. The Presidency later said that Ramaphosa was merely making a joke and the iPad was never missing – probably in response to the clip going viral and the reaction social media users had to the incident.