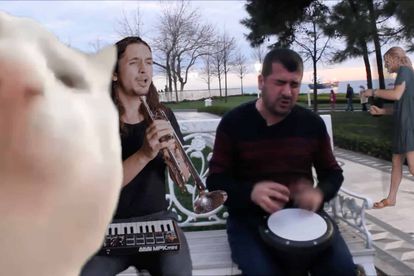 The Kiffness’s collaboration with a Turkish street musician has fans around the globe. Image: Supplied

The Kiffness’s collaboration with a Turkish street musician has fans around the globe. Image: Supplied

The Kiffness’s recent collaboration with Turkish street drummer Bilal Göregen on Finnish the folk song Ievan Polkka went viral — and Scott has a kiff story as to how this remix came about.

Bilal’s performance of Ievan Polkka first appeared on the Internet in 2018. When Scott first saw the video, he thought it was incredibly catchy and would be a fun song to remix, so he did a short live looping remix and put it up on the Internet.

“The response was great and many people seemed to want an official release, so I DM’d my remix to Bilal on Instagram and asked him if he’d be keen to collab,” Scott said.

To his surprise, Göregen said he liked the rendition and that the two should do a full edit. Scott was in Joburg at the time, so he got his bandmate Raiven to record some sax and send it to him.

“Jane from Veranda Panda also recorded some violin and sent it to me from Durban. I had planned an interview with Peach van Pletzen during my time in Joburg, so we killed two birds with one stone and went to his studio to record my vocals and trumpet,” Scott said.

“Peach is also an excellent sound engineer, so I roped him into mixing and mastering the song. He nailed it!

“With the song done, I needed a music video and green screen seemed to be the best way forward, considering there was space on the bench next to Bilal. I don’t have a green screen, so I reached out to some friends who could maybe help.

The Kiffness ropes his wife in as backup dancer

“During lockdown I made contact with Dan Mace and so I reached out to him. Unfortunately he was away, but Dan’s producer, Jess Raine, got back to me and was the most legendary person to work with. She convinced surf videographer Paul Daniel to be our DOP [director of photography], and gaffer Tobie Smuts to help us with the green screen and lights.

“I roped my wife into being the backup dancer, and I’m so glad she did, because it’s the magic sauce that ties the whole video together.”

With great footage, the only thing left to do was the edit: “Luckily there were some kiff film students around, William Annesley and Ethan Lundy, who were willing to help out. They helped key out the green, did a grade and made the footage look lekker. With a bit of tweaking and editing, the video was ready.”

The Kiffness gets love from the people of Turkey

“The response has been nothing short of amazing and I’m just blown away by the love we’re receiving from the people of Turkey,” Scott said. “I’ve always wanted to visit Turkey, but this whole experience has just made me want to visit even more, because I really want to meet Bilal.

“Without Jess or Dan Mace, the video wouldn’t have been possible, so I’m really just so thankful. This video has shown me once again that the Internet can be a wonderful place.”

The South African catches up with The Kiffness

Music is a way of bringing my memes to life.

My wife. Although it is 2021 and I feel like calling my wife a possession is maybe not very progressive.

The one where people enjoy themselves.

I make memes and I have an all-floral suit.

I’d be a professional meme maker. I’m still trying to figure out how to make money from that though.

Watch The Kiffness perform ‘Wiggle A Bit’ with Nathan Ro:

Listen to The Kiffness’s take on ‘Sugarman’ with Mathew Gold here:

Give us some real, proper slang and what it means

Winning an argument with my wife. Jokes, that’s never happened.

There’s never a point at which you’ve “made it”.

I make memes for free.

To get lank streams and make kiff memes.

Watch: The Kiffness, Max Hurrell in the mix with ‘Tough Time Never Last’