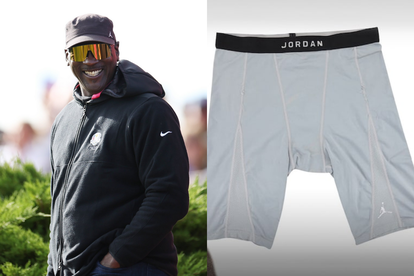 One Michael Jordan fanatic is now the lucky owner of the basketball star’s tighty-whiteys and we can bet that he is pretty chuffed with himself.

The underwear was put on auction in August this year and was finally sold to the biggest Michael Jordan fan who forked out an unbelievable amount of money to call himself the owner of someone else’s used underwear.

Sports fans can be pretty extreme and one oke proved this after he (or she!) paid a whopping $2784 (R41 973,62) for a pair of boxers that once belonged to basketball legend Michael Jordan.

The white pair of boxers went on auction at Leland Auctions on 25 September this year and was sold to the highest of 19 bidders who is now the new owner of the underwear which was described by the auctioneers as having signs of “definite use”.

ALSO READ: How much is Lionel Messi’s snot worth? Used tissue on auction for STAGGERING sum!

Despite what it sounds like, the underwear was taken to a dry cleaner beforehand, the ‘definite use’ only refers to some loose threads that are hanging from the pants.

According to TMZ, the underwear was taken to Leland Auctions by Michael Jordan’s friend and bodyguard John Michael Wozniak who also gave the auction house a few other items that once belonged to the basketball player.

Two bracelets that belonged to French queen Marie-Antoinette, each coated in 112 diamonds, will be sold together and are estimated to fetch between $2 to $4 million when they go under the hammer on 9 November.

That estimate “includes not only the intrinsic value of the diamonds but also the possibility to wear jewellery that was once worn by the famous queen Marie-Antoinette,” Christie’s jewellery specialist Marie-Cecile Cisamolo told AFP.