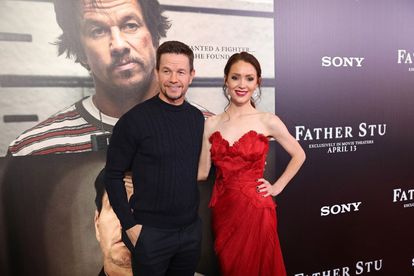 Mark Wahlberg has a famously punishing physical routine that has kept the 50-year-old in enviable shape.

But for his latest outing, Father Stu, he had to ditch the training and eat. A lot.

ALSO READ: ‘The Batman’ and vigilantism in film and pop culture

The physical transformation from taut athlete to out-of-shape and overweight was in aid of his role as Stuart Long, an amateur boxer who hangs up his gloves after an injury and moves to Hollywood to become an actor.

AN ‘UNUSUAL ROLE’ FOR MARK WAHLBERG

Odd-jobbing in a supermarket, Long meets Carmen, played by Teresa Ruiz (Narcos), and sets out to win her heart by going to her church.

His avowed agnosticism gives way to genuine faith, and he decides he will become a priest, despite the scepticism of his parents, played by Jacki Weaver (Oscar-nominated for Silver Linings Playbook) and Mel Gibson (Braveheart).

He must also face his biggest challenge: a diagnosis of a degenerative disease that will rob him of the use of his body.

For Wahlberg, who also produced the movie, the real-life story of Father Stu is a departure from previous action outings like Mile 22 and Uncharted – but, he insists, not unexpected.

“It’s an unusual role, but it’s also (a) pretty obvious choice if you kind of know me and my own personal journey and what I’m looking to do as I get older and try to find things that have a little bit more meaning and purpose,” he told AFP.

“But I always felt like I was… tasked to do it for a reason. This is for God’s greater good and so to do that, and utilize my talents and gifts for that particular purpose is something that I embraced,” he said.

Along with its unabashedly religious theme – the film will be released in the United States ahead of the Easter Weekend – Father Stu also zooms in on family, and on human kindness.

For Ruiz, these elements all came together in her character.

“I liked that she was very kind and very generous and she had a very rooted faith,” Ruiz said.

The cast of Father Stu, which also includes Malcolm McDowell (A Clockwork Orange), afforded Ruiz the chance to work alongside a different generation of actors – at close quarters.

“My camper was right next to Mel (Gibson’s) camper. So sometimes I would peek and hear him, how he prepped and that was very important to me as a young actor, you know, to hear how one of the greats works.”

“And then I would go on set with him and it was just this presence that he has, and his incredible talent.”

For Weaver, Wahlberg was one of the biggest revelations of the project.

“I thought he might be a bit of a ruffian, because he always played those tough roles,” the Australian told AFP.

“But he’s a wonderful person.”