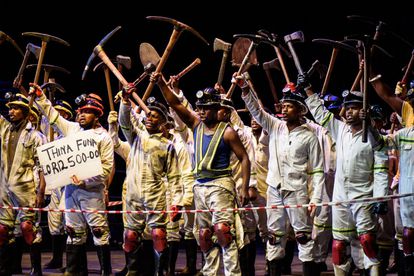 ‘Marikana-The Musical’ will be showing at the South African State Theatre (SAST) between 2 August and 28 August. Image: Supplied

‘Marikana-The Musical’ will be showing at the South African State Theatre (SAST) between 2 August and 28 August. Image: Supplied

16 August marks a decade since the heartbreaking Marikana massacre. 34 mineworkers, who were on strike for better wages, were gunned down by police after days of unrest at the Lonmin Platinum Mine in the North West. To commemorate the event, Marikana-The Musical will be returning to the South African State Theatre (SAST) in central Pretoria from 2 to 28 August.

Written and directed by award-winning playwright, Aubrey Sekhabi, Marikana-The Musical is an adaptation of the book, We Are Going To Kill Each Other Today: The Marikana Story written by Thatouxolo Jika, Felix Dlangamandla, Lucas Ledwaba, Sebabatso Mosamo, Athandwa Saba and Leon Sadiki.

Marikana-The Musical made its stage debut in 2014 and won six Naledi Theatre Awards the following year. The awards include Best Production of a Musical, Best Direction, Best Set Design and Best Musical Score.

The play was last staged at the SAST in 2017 and will make its return on 2 August.

A 13-piece band has also been assembled to give a blow-by-blow account of the events that occurred on 16 August 2012.

Speaking to Eyewitness News in 2017, Aubrey Sekhabi expressed that the inspiration for the musical came from its living history.

“We wanted to make sure that we don’t forget. For me, the connection became ‘this happened during our lifetime and this is a story that we need to tell.”

Marikana-The Musical will be on from 2 August to 28 August at the SAST in Pretoria.

Tickets for the theatre production are available for R150 each.