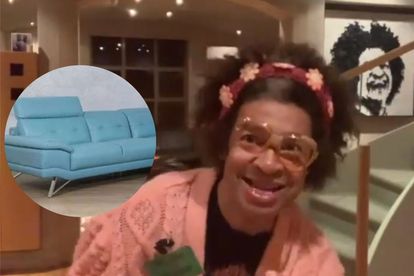 Marc Lottering had his say on South Africa’s famous looted blue couch that made headlines over the past week.

Colleen the Cashier has her own suspicions

As part of his ‘Colleen the Cashier from Hell’ skit, Lottering shared a video to Instagram joking that one of Colleen’s colleagues asked if they have a connection for yellow cushions because it goes well with the colour blue.

“What was looted last week in Durban? A blue couch! Did they find the whole couch, no!” the comedian explains before signing off with a reference to Jessica fletcher.

In the video, Colleen seemingly references the missing piece of the R70 000 San Pablo corner sofa, a genuine leather sectional with “elegantly sloped armrests and supportive headrests”. The sofa was recovered by the police after it was looted in Durban. It is now situated at Sydenham Police Station in Durban — but is missing an armless piece.

A reward for the blue couch

Owner Greg Parry said the Leather Gallery was offering a reward for “actionable intel” that can assist with recovering the missing piece.

“The San Pablo leather corner sofa was subjected to extremely rough treatment and had clearly been pushed, pulled, and dragged when it was looted from our Springfield showroom and then shoved onto the back of a bakkie, as seen in a video that was broadcast by the SABC.

“Furthermore, it appeared that it was left outdoors for a few days and was in turn subjected to harsh elements, which severely degrades and damages genuine leather. As such a famous sofa, we believe that it should be displayed in all its glory,” he said according to TimesLive.

Tums Mmope does it again

In another skit about the blue couch, local TikTok star, Tumi Mmope, better known on social media as ‘Tums’, proceeded to post a video about ‘finding’ the missing couch. The video clocked in over 12 000 likes on Twitter alone and almost 50 000 views on TikTok.

TikTok users went on to thank her for “bringing the light in the darkness”.