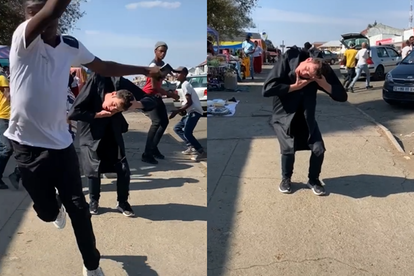 A young local magician has proven himself to be quite intriguing to watch after sharing another mind-blowing clip of himself performing a magic trick. In a video that has gone viral online, Wian van de Berg can be seen scaring a couple of people in the street.

Locals have been laughing out loud at the people’s reaction in the hilarious video.

Some of the things magicians are able to do are truly mind-boggling. A young local magician, Wian van de Berg is one of those magicians who render crowds speechless with his tricks.

In a video that was posted online, the talented young man can be seen entertaining some people on a busy street. Things appear to be all good and well until the magician magically removes his entire head from his body.

This trick proved to be too much for those around him. In fact, one man was so shocked that he instantly jumped as far away from the “headless” magician as he could.

Here’s what netizens have said:

While many love the Free State magicians ability to entertain, others were more bothered by the spectators reaction. Here are some of their comments:

“The way he jumped.”

“The guy in white really made me cry.”

The South African previously reported that the self-taught magician Wian van den Berg has taken video-sharing platform TikTok by storm with his magic tricks and now he has launched his first set of non-fungible tokens (NFTs) on Binance on 24 June.

The magician’s launch of an NFT is part of Binance’s NFT “100 creators”; a campaign on Binance Marketplace to support and promote innovative creators from across the world.