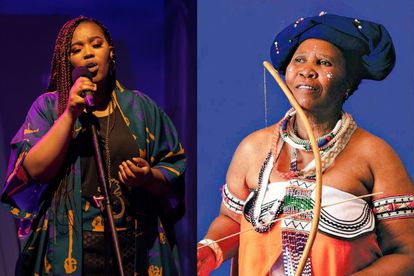 Known as national treasures in their own rights, Madosini and Msaki are two of Mzansi’s brightest and most respected musicians. The two Eastern Cape-born musicians were recently honoured by music distribution company Platoon with a stunning mural in Johannesburg’s lively Maboneng.

Madosini Latozi Mphahleni has made an exceptional contribution to South Africa’s music industry over the years. She is known for playing indigenous instruments such as the uhadi (calabash resonated bow), umrhubhe (mouth bow) and the isitolotolo (harp). She began playing these instruments at just 10 years old.

The 77-year-old is regarded as “The Queen of Xhosa Music”. Not only is she a musician, but she is also a poet, storyteller and composer.

Singer-songwriter Msaki’s sound is unique and unlike anybody else’s in music. Msaki is honest in her songwriting and her unique voice easily captures an audience. She has collaborated with the likes of Black Motion, Black Coffee, Tresor and Sun-El Musician.

The mural is located in Maboneng on Fox Street. It was designed by street artist Dbongz who shared that he was grateful for the opportunity to create the mural.

“It means so much to me and I’m lost for words,” he said.

After the mural was unveiled, Madosini said she feels immortal. “I’ve always felt like the underdog and this gesture makes my spirit feel elated.”

Fetch Your Life collaborator Msaki shared that it is an honour for her to be next to Madosini on the mural.

ALSO READ: Who made it? Have a look at the final eight contestants of ‘Idols SA’ top 16

As part of Platoon’s Women’s Month celebration, the two musicians came together to create an Apple Music playlist, titled, Heritage, Healing and Hope.

Msaki shared that it is a treat to hear the music Madosini plays in her home and to co-curate a playlist with her.

Listen to it here.

Load shedding to be eased over the weekend as diesel arrives

Orlando Pirates: How Erasmus will bless Bucs in four ways

‘Uzalo’: Bonga Dlamini back as Mkhonto to shake things up

Five sporting inventions from South Africa that changed the world