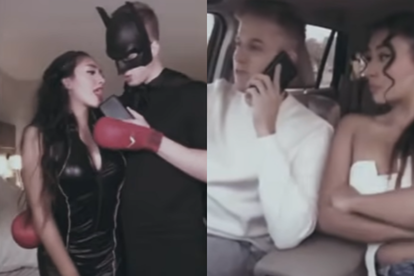 This couple say they are step-siblings. Images via TikTok: @AlphaFamilia

This couple say they are step-siblings. Images via TikTok: @AlphaFamilia

A young couple has left the internet divided after revealing that they were step-siblings. They first revealed their relationship on the internet while trying to gain some followers on TikTok. They also said that their parents are totally unaware that they are in a romantic relationship.

One hears just about anything on the internet and some of the things that people say and do are so bizarre that you literally can’t believe it until you see it with your own eyes.

One young couple, Diana Camila Avila and Jordie Vena left people with mixed reactions when they started a joint TikTok account called Alpha Familia. While working hard to gain a following on the popular social media app, they announced that they were actual step-siblings who have “fallen in love”.

Some of the videos they shared on the page include clips with titles like “How my first kiss with my step-brother went”, IOL reports. Meanwhile, in an interview with Ladible, they reveal that they “fell in love at first sight,” but kept their feelings quiet because of the circumstances.

“It’s hard for people to understand our relationship, but love is love. It’s hard to know who you’re going to fall in love with,” she said.

Netizens don’t know what to make of it

The couple has received a number of different reactions from TikTokers who either slammed them or expressed that they weren’t really blood-related so it shouldn’t be a big deal.

“Honestly if they were both older and they started dating shortly after knowing each other. Then I don’t think it would have become problematic. However, since they lived as brother and sister for three years before dating. That just makes it creepy and unsettling.”

“I think it is extremely confusing for young kids. They post their videos on tiktok where tons of kids are. They see step-siblings but some young kids don’t understand the difference between brother, step-brother, half-brother, brother-in-law, etc. so I think it can be really confusing and it looks like it is ok for brother and sister to be attracted to each other and date each other.”

Meanwhile, the account Alpha Familia has since been deleted but Diana is still on the platform under the name @Diana_Dentist.