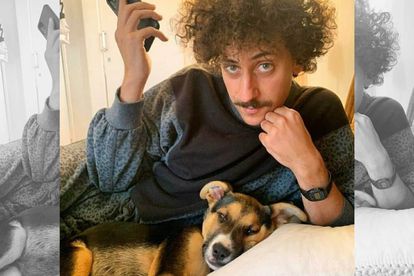 South African comedian Schalk Bezuidenhout has shown that despite the pandemic you can still sit back, relax and have a good laugh.

When we went into lockdown on 27 March 2020, Bezuidenhout decided to make the best out of the situation.

The comic has been documenting a few minutes of each day and sharing this via his Facebook and Instagram profiles.

Starting at Level 5, entering Level 4, getting to Level 3 and re-entering advance Level 3, Bezuidenhout has invited a virtual audience into his home.

Bezuidenhout’s creative and original approach allows audiences to identify the humour even in a bad situation.

Pieter Hendrik Schalk Bezuidenhout is a 28-year-old comedian from Kempton Park in Gauteng.

As his website puts it, “family and friends stood back as they watched Schalk evolve from an Afrikaans conservative caterpillar into a beautiful drama queen butterfly, complete with a moustache and furry afro”.

What’s more, he is now also famous for his wild sweaters.

From posting images of his dad eating breakfast in the morning to updating us about Cyril’s speeches and more, here are five instances that stood out about Schalk Bezuidenhout’s time in lockdown:

Like other artists, Schalk has had to adapt and reimagine his performances within a digital space. This led to him presenting live online shows, such as the Lockdown Laughs series which ran between 3 April and 26 June.

On the 27 March 2020, Bezuidenhout announced on his social media accounts that there was a new addition to the family: a puppy.

“Welcome to the family Otis,” said Schalk in the caption. Throughout the comedian’s lockdown diaries we witness Otis grow up before our eyes.

You may be surprised to hear our Schalkie is officially a fan of the Bachelor SA, and he has not been shy to let us know.

In recent lockdown diary video entries, he discusses who his favourite participant in the reality TV show is. He also talks about how sad he was when he found out “terrible news” watching the season 2 finale.

On 2 July Bezuidenhout launched a limited batch of Feeling Good Feeling Positive Pinotage. He was thrilled when, only three hours later, the wine sold out.

The scariest thing that happened to Bezuidenhout was going for a COVID-19 test. He had been experiencing flu-like symptoms over lockdown and so he went to check it out.

The comedian posted a video on 8 July urging people to follow all preventative measures. Shortly after this, thankfully, he posted that his results had been negative.

Throughout lockdown Bezuidenhout has managed to entertain and put a smile on many South Africans faces.

To date, the comedian has over 94K likes on his Facebook page and 123K followers on Instagram.

As one of South Africa’s major comedy bookers, Parkers Comedy, says on its website: “Schalk has come a far way in the short amount of time that he has been doing comedy”.

Long may he entertain us!