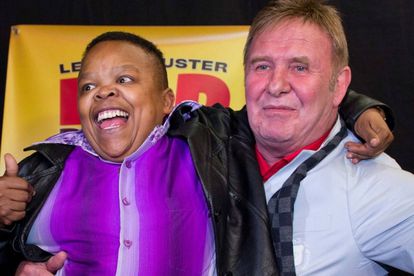 ‘Mr Bones 3: Son of Bones’ sold more than 38 000 tickets at the box office in its first week, Image via Twitter @brieflyza

‘Mr Bones 3: Son of Bones’ sold more than 38 000 tickets at the box office in its first week, Image via Twitter @brieflyza

Mr Bones 3: Son of Bones follows a young boy who overcomes a series of challenges to prove himself as a man. The film stars the likes of Wandile Molebatsi, Jay Anstey, Sans Moonsamy, Daniel Janks, Sthandile Nkosi and Jerry Mofokeng.

Speaking to IOL about the film, Tumi Morake described Leon Schuster as “a hoot”.

“He is like a kid in a candy store on set, there’s always a joke or a prank coming.”

“Watching how meticulous he is with the comedy – from choices in words and sounds to how the comedy works physically in a scene – was like being in a comedy masterclass,” continued Morake.

‘MR BONES 3: SON OF BONES’ IS HOT AT THE BOX OFFICE

Taking to Twitter on Wednesday 4 May, entertainment commentator Phil Mphela revealed that Mr Bones 3: Son of Bones has been flying at the box office.

Mphela reported that the film has made more than R4.2 million from ticket sales.

Released in 2008, Mr Bones 2: Back from the Past made R10 million when it opened at the box office.

In some of his films, specifically Mama Jack and Shucks Tshabalala: Survival Guide to South Africa, Leon Schuster wears blackface. In an interview with Sunday Times in 2018, Shuster said he regretted having profited from blackface.

“On Twitter, they said stay away from the blackface, it’s not on. It was black people talking to me and you’ve got to listen. I can’t do it because I’ll be heavily criticised. In the olden days, it troubled nobody. But I won’t go blackface now, I can’t do it.”

“There’s not one actor in the world that will. It’s just racist,” said the 70-year-old filmmaker.