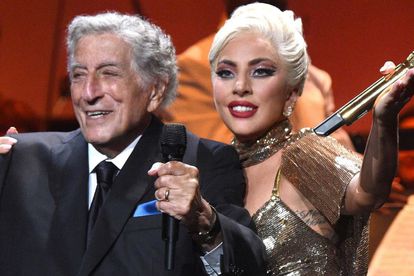 Tony Bennett and Lady Gaga have scored a last-minute Emmy nomination for their television special, ‘One Last Time’. Image via Twitter @ThrowbacksGaga

Tony Bennett and Lady Gaga have scored a last-minute Emmy nomination for their television special, ‘One Last Time’. Image via Twitter @ThrowbacksGaga

American jazz singer Tony Bennett has more to celebrate after turning 96 years old on 3 August. The legendary musician and his part-time collaborator, Lady Gaga, have been added as last-minute nominees for the 74th Primetime Emmy Awards. The two singers, who released their collaborative album, Love For Sale in October 2021, are nominated for Outstanding Variety Special.

Tony Bennett and Lady Gaga have received high praise from music critics for their album, Love For Sale. The album features favourites like the album’s title track, Night And Day and You’re The Top. The Post praised the 12-track album for its “vibrancy and instrumentation”. The talented duo scored a Grammy nomination for Love For Sale earlier this year.

Bennett and Gaga have been nominated in the Outstanding Variety Special category at the Primetime Emmy Awards for their one-night-only concert, One Last Time.

The television special was filmed at Radio City Music Hall in New York.

WATCH THE DUO PERFORM ‘THE LADY IS A TRAMP’ HERE

Tony Bennett and Lady Gaga have a long history together. As per People, the two first met in May 2011 when Gaga performed at the Robin Hood Foundation charity gala.

“When we were there, I sang a jazz song, Orange Colored Sky. Tony heard me sing it and he asked to meet me after the show,” recalled the 36-year-old Oscar winner.

Bennett proposed that the two collaborate on a jazz album. Before the release of Love For Sale, the two worked on The Lady is a Tramp on the 96-year-old’s 2011 album, Duets II.

EVERYTHING TO KNOW ABOUT THE PRIMETIME EMMY AWARDS

HBO Max’s dark comedy series, Succession, has scored the most nominations for the 2022 Primetime Emmy Awards with 25 nods. Following closely behind is Apple+’s comedy-drama, Ted Lasso, with 20 nominations

After winning the Emmy Award for Outstanding Lead Actress in a Drama Series in 2020, Zendaya is still breaking records. This year, the Euphoria star has made history as the youngest producer nominated for an Emmy.

The awards are set to take place on 12 September.