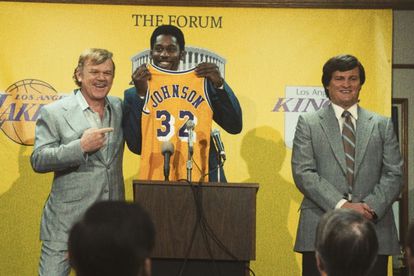 On the heels of the success of a smash docuseries on the Chicago Bulls’ Michael Jordan, an HBO drama based on the flashy 1980s Los Angeles Lakers is tipping off Sunday.

Across 10 episodes Winning Time revisits the Showtime era of the famous California franchise following its 1979 takeover by Jerry Buss – a colourful businessman played by John C Reilly – who aimed to make basketball a spectacle on and off the court.

The period saw the Lakers bring home five titles across nine NBA finals appearances, the reign of purple and gold that endured until 1991 when Magic Johnson announced he had tested positive for HIV and would retire (he made two comebacks following the abrupt announcement.)

Adam McKay – the American film director behind Don’t Look Up, The Big Short and HBO’s smash series Succession – co-produced the series, bringing together a cast that includes established talents like Adrien Brody along with upstarts Quincy Isaiah and Solomon Hughes, who play Johnson and Kareem Abdul-Jabbar.

The creative team has pulled out all the stops to broaden the new series’ appeal beyond established basketball fans, keeping sports sequences to a minimum.

The series aims above all to portray the transformation of the once-mediocre Lakers into an entertainment machine that captured the glitz of their hometown LA.

Pearlman told AFP that megastar Jordan was “lucky” to rise with the Bulls when he did, because at that point “the league was at a different level.”

“And it was at that level because of Magic, you know, and the Lakers and Larry Bird and the Celtics.”

Winning Time takes full advantage of the era’s eclectic roster. Alongside the rookie Johnson – whose energy in the locker room and sexual exploits outside it feature prominently in the show – there is introvert Abdul-Jabbar, a civil rights activist and convert to Islam.

There’s also Buss, both a boss and a visionary, and coach Jack McKinney, who nurtures an obsession with keeping the game in perpetual motion before the arrival of Pat Riley.

Brody plays the latter with the slicked-back hairdo that inspired the coach’s friend Michael Douglas when the actor played Gordon Gekko in Wall Street.

Following the global success of April 2020’s docuseries The Last Dance on Jordan – which was broadcast on ESPN domestically and Netflix for international fans, during the height of COVID-19 triggered rules to stay home – projects on the Lakers are aplenty.

Along with Winning Time, Apple TV starting 22 April will broadcast a four-episode documentary on Johnson, called They Call Me Magic.

Hulu, a subsidiary of Disney, is also planning a docuseries retracing the franchise’s last four decades, a project in partnership with its current owner Jeanie Buss, the daughter of Jerry Buss.

Streaming platforms are in fierce competition for sports-related content, though media analyst John Cassillo says the strategy being taken with the Lakers won’t necessarily work for all teams.

“The 1980s Showtime-era Lakers are the sort of team that could thrive with this scripted treatment because of the intriguing personalities involved, the fame surrounding those teams, and having Los Angeles itself as a backdrop,” he said.

He also said the NBA’s “emphasis on marketing individuals” makes “better TV” than most other sports would.

But still, “streaming has yet to go all-in on sports,” he said. “We may just be scratching the surface on how much sports content streaming can produce.”