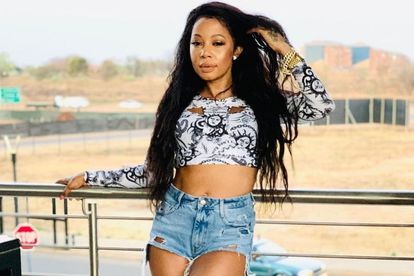 Kelly Khumalo was the “fan favourite” pick to take over media personality Somizi Mhlongo’s seat on the judging panel of Idols SA. Somizi Mhlongo took “some time off” after his estranged husband Mohale Motaung accused him of abuse.

Although it was not confirmed that Somizi had totally lost his role on Idols SA and Metro FM in the aftermath of the abuse allegations, he recently confirmed that he is unemployed. Somizi is one of the most loved judges on Idols SA and fans could not have thought of a better replacement than his friend, Kelly Khumalo.

However, City Press reports that Kelly Khumalo has rejected Idols SA offer to join their judging panel. This is because she is already attached to Idols SA rival competition show – Stand Up SA on SABC 2. The show premiered on Sunday 5 September.

Therefore, Kelly Khumalo reportedly turned down the judging role on Idols SA. It is unclear whether the competition offered the Empini hitmaker a permanent seat on the judging panel alongside Unathi Nkayi and Randall Abrahams or a guest role.

WHAT YOU NEED TO KNOW ABOUT ‘STAND UP’ SA

Stand Up SA is a family singing competition. Participants compete mic to mic with other families for the R100 000 grand prize. The singing competition is hosted by Kelly Khumalo alongside Dineo Langa, Lorcia Cooper and Kurt Darren.

“I cannot wait for the public to see this. One of the things I was looking for as a judge was the chemistry between the families,” said Khumalo in the virtual media launch of the show.

Kelly Khumalo announced that she would be a judge on the show back in March via a video she posted to Instagram.

“We are looking for South Africa’s most talented duo. You can pick any member of your family. This is about a duo, not a solo,” said Kelly Khumalo in the announcement video.