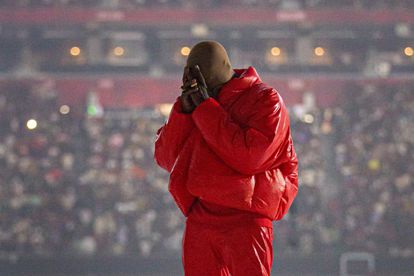 American rapper Kanye West was set to release his tenth studio album Donda named after his late mother on Friday 23 July. Although the album did not release, the rapper trended for the listening event he held.

Kanye West is one of the few people who can pull a whole audience, amid a global pandemic, just to watch him dance to his own music, in the middle of an arena. That is how anticipated his latest album was. While thousands of people turned up to the listening event held at the Mercedes Benz Stadium in Atlanta, Georgia, Donda was also available for streaming on Apple Music.

Here are four surprises from the listening event of Donda.

Jay-Z made a surprise appearance on the song Guess Who’s Going to Jail Tonight with a fiery verse to end the album, leaving fans shocked at the reunion of the pair.

Although Jay-Z did not attend the event, his verse was played while Kanye continued to dance to his own music. Watch the video here.

Although the former couple are going through a divorce, reality star Kim Kardashian showed up to West’s listening event with their four children North, 8, Saint, 5, Chicago, 3, and Psalm, 2. Kim and Kanye also recently went on a family vacation to San Francisco just before the album was released.

Since the divorce Kim and Kanye have both been doing great financially. Kanye West was named the richest African American man in history in March and Kim followed closely by officially becoming a billionaire in April according to Forbes.

3. A SONG ABOUT KIM KARDASHIAN

Many were unsure whether Kanye would rap about his divorce in his new album and if he did, would he call Kim out? Well, it turns out he does have a song that speaks about his divorce and family life on the album titled Welcome To My Life. The emotional song describes Kanye’s relationship with his family and the struggles he has been through while reflecting on his marriage.

Fans who attended the listening event said the song made Kanye himself emotional as he reportedly paused for two minutes and cried. A source told Page Six that Kanye would not rap negatively about Kim.

“Kanye actually played the song for Kim personally before the listening party,” an insider close to the former couple told Page Six.

“It’s emotional and personal. Not negative at all,” the source added.

Besides being named after his mom, Donda West, Kanye dedicated this album as a testament to his mother. Donda West was an English professor at Clark Atlanta University which is why fans think he selected the Mercedes Benz Stadium in Atlanta for his listening event and gave out free tickets.