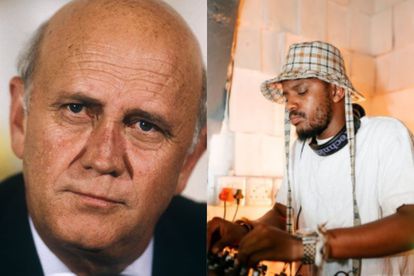 They want the trio to officially drop the hit song just in time for former president FW de Klerk’s funeral.

Tweeps feel that Kabza’s song, Asibe Happy which has taken over Mzansi would be a great send-off for the former South African president who passed today (11 November) at the age of 85.

Flocking to Twitter in droves, some tweeps were upset that the former head of state even heard the hit song in the first place.

Another tweep replied to Julius Malema’s tweet “Thank you God” with the song.

A tweep by the handle @shufflesdu tweeted that FW De Klerk ‘s family should not hold a state funeral if they don’t want people to come dance to the sounds of Asibe Happy at De Klerks’ grave.

Though the musician never replied to tweeps when they tagged him this afternoon, Sony Music South Africa confirmed that the hit song will officially be released on Friday 12 November.

The former president’s family released a statement to the media this afternoon which confirmed that he passed away earlier this morning at his home in Fresnaye after his struggle against cancer.

He is survived by his wife Elita, two children Susan and Jan, and his grandchildren.

His foundation confirmed in March this year, that he was diagnosed with mesothelioma, a form of lung cancer.