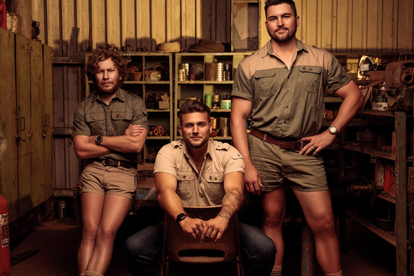 Hunky two-tone trio: Jan Jan Jan are back in the tight little shorts with a brand new music video. Image: Facebook via @JanJanJanBoerBoel

Hunky two-tone trio: Jan Jan Jan are back in the tight little shorts with a brand new music video. Image: Facebook via @JanJanJanBoerBoel

The name Jan Jan Jan might ring a bell. Or perhaps you have seen their muscular legs on advertising campaigns?

Boerboel Wear is a proudly South African fashion and lifestyle brand known for entertaining slogans, such as “Wys Jou Vleis” and “Gooi Mielies”. Their aim? To make khaki king!

And the marketing shoot for the brand’s first line was where this unlikely boyband came to be. It in fact went viral.

As reported by Cape Town Etc, Jan, Jan and Jan (yes, three Jans) got together after Donovan Goliath (The Real Goboza host) shared a photo of the ‘Backstreet Boers’ in 2019 on Twitter asking his followers to ‘name the rap group’. The trio were just models back then, but Goliath’s Twitter post sparked an idea.

They started a group, called themselves Jan Jan Jan and started to make music. Music that tannies, ooms, fans of khaki shorts and the rest of South Africa will appreciate.

TAKE IT AWAY, BOYS!

Since the boys in two-tone first stepped onto the South-African music scene, fans and critics alike were fascinated. And now they have released a brand new music video.

Jan Jan Jan are still leaving tannies gasping for breath with their muscular legs and arms, and the video tells the story of two such tannies looking to bag their own two-toned gentlemen. A blonde beauty however snatches the toned hunk right from under their noses.

Since the video’s release it’s already been viewed 103 954 times.

As reported by 2oceansvibe.com, fans will look to see if the video rivals the success of Jan Jan Jan’s first video, Wys Jou Vleis, which has in excess of seven million views.

ALSO READ: Harry Styles releases ‘As It Was’ music video ahead of new album [watch]