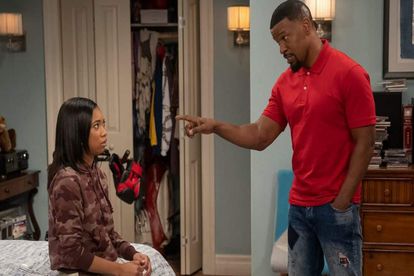 Jamie Foxx as Brian in ‘Dad Stop Embarrassing Me’.
Image via Twitter @strongblacklead

Jamie Foxx as Brian in ‘Dad Stop Embarrassing Me’.
Image via Twitter @strongblacklead

Jamie Foxx is returning to his sitcom roots and taking his daughter along for the ride in the series Dad Stop Embarrassing Me, which is premiering on 14 April.

Netflix Queue posted the first pictures of the upcoming sitcom.

Netflix’s sub-brand Strong Black Lead followed up with some more.

Dad Stop Embarrassing Me is inspired by Jamie Foxx’s real-life relationship with his eldest daughter Corinne Foxx. Corinne, who takes on the behind-the-scenes role of executive producer, described the show as something people could relate to.

“When you’re in the moment as a teenager and going through this stuff, it’s not funny and you’re actually upset,” she told Entertainment Weekly.

“But it’s so fulfilling to see how these stories have grown into something that my dad and I can cherish and love. This is our story and it’s just like, ‘Wow, at least we went through all that for something.”

To cope with his new responsibilities, Brian turns to his sister, played by Porsha Coleman, and father, played by his 1990s In Living Color co-star David Alan Grier. Grier’s character Pops is based on Foxx’s own stepfather.

Grier said Jamie Foxx was there every step of the way while filming.

“My main concern was, ‘Is Jamie really going to be in the show?’ I didn’t want to do a show where your famous friend is like, ‘Yeah, man, I’m going to be in it’ but it’s like the Brad Pitt Comedy Hour and he introduces the first act and then comes back at the end of the season,” Grier told Entertainment Weekly.

“But Jamie was there every minute, every day, encouraging me to do more and run with it,” he added.

Corinne Foxx reflected on her “embarrassing” teenage memories of her dad growing up.

“I was cheering at my final game in high school, and I look into the crowd and my whole family is there in T-shirts with my face on them,” she said.

“It’s 15 people and my dad is the ringleader. The last thing a teenage girl ever wants is their dad drawing attention to themselves in that way.”

Jamie Foxx will reunite with Bentley Kyle Evans as the showrunner who worked on The Jamie Foxx Show.

The sitcom will be directed by award-winning director Ken Whittingham who also directed Black-ish, Everybody Hates Chris, The Office, Scrubs and other shows.

ALSO READ: Emma Stone brings out her devious side in ‘Cruella’ trailer [watch]