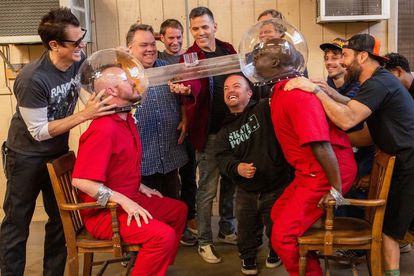 Jackass Forever, the fourth installment of the Jackass series, hits cinemas in South Africa on Friday 11 March. Critics have already dubbed Jackass Forever the best film in the slapstick series. Unfortunately for fans, this is Johnny Knoxville’s last film in the series.

Jackass Forever is a compilation of pranks, skits, and hilarious conservations with the cast. Jackass cast members Steve-O, Johnny Knoxville and the gang return for another fun-filled film, jam-packed with laughable moments.

The film will be Johnny Knoxville’s final contribution to the Jackass franchise. In an interview with GQ, he emphasised how many punches his body has taken throughout the years.

“You can only take so many chances before something irreversible happens,” Knoxville told the publication.

“I feel like I’ve been extremely lucky to have taken the chances I’ve taken and still be walking around,” he added.

Speaking on The Nine Club Clips podcast in July 2021, Wee Man said fans can expect “backyard f*ck each other up stuff.”

The actor also detailed how he got the cast and production team navigated around the COVID-19 pandemic.

“We started before COVID and we took the COVID break. Paramount used us as the guinea pig to see how studios could get back into filming.”

WHAT THE CRITICS SAY

Jackass Forever currently has a 92% rating on Rotten Tomatoes and it has received raving reviews from several publications.

The Daily Beast noted that the film is the “masterpiece that will unite America.”

“It is among the most thrilling cinematic experiences I’ve had in my lifetime,” writes the publication.