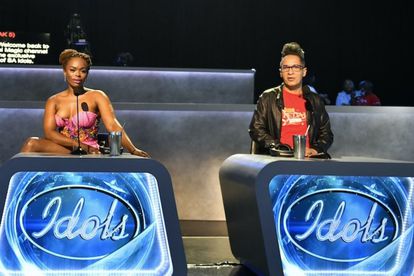 It’s crunch time on Idols SA as the competition gets more exciting for fans, and of course, more challenging for the contestants. On Sunday 31 October, Idols SA fans and judges said goodbye to Cape Town-based singer Daylin Sass who did not receive enough votes to stay in the competition.

Four remain in the competition, but who will advance to the top three?

The performance kicked off with the contestants performing Zonke’s Viva the Legend. Each contestant showed their vocal capabilities during the performance.

One of Mzansi’s star entertainers, Kelly Khumalo, joined Randall Abrahams and Unathi Nkayi as a guest judge on Sunday evening’s episode. Kelly noted that she is looking for vocal ability among the top four. The top four performed two songs each and their first song was chosen by the judges.

The 21-year-old S’22kile (S’thuthukile Babalwa Langa) was first up on the stage and Unathi chose Rihanna’s smash hit Diamonds for her to sing.

All three judges complimented the Pietermaritzburg-based singer with Randall noting that she has star power. Kevin Maduna was up next and Unathi chose DJ Maphorisa and Tyler ICU’s amapiano hit Banyana for him.

Kevin certainly brought a lively energy to the performance. While he impressed the judges, Kelly said he should be careful with his note and told him not to forget that Idols SA is a singing competition.

Karabo Mathe performed Jennifer Hudson’s ballad And I Am Telling You I’m Not Going. She received a standing ovation from the judges while Berry’s (Berenike Trytsman) rendition of Ariana Grande’s No Tears Left to Cry did not hit the mark.

The second theme for the show was South African Music Awards (Sama) winners.

S’22Kile performed Sun-El Musician’s Sonini featuring Simmy with Randall noting that she owned the song. “It was almost like your own record,” he said. 29-year-old Kevin stunned with Mi Casa’s classic hit These Streets.

Karabo performed Brenda Fassie’s Black President and Kelly was ready to give her the Idols SA title. Cape Town-based Berry performed Goldfish and Sorana’s Hold Your Kite but again, her performance did not land well with the judges. Kelly noted that she needs to smoothen her rough edges.

THE FINAL STAGES OF ‘IDOLS SA’

Randall noted that he is impressed by the talent that he has seen throughout the competition.

On the next episode of Idols SA on Sunday 7 November, the top four will become the top three. The contestants will perform three songs each one of which will be a duet with an Mzansi gospel artist.