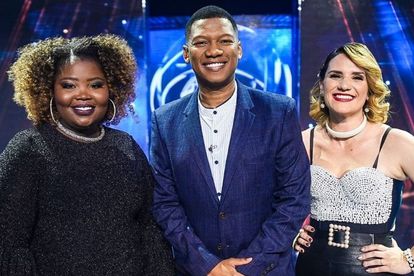 From 15 000 contestants down to two… The Idols SA journey is coming to an end soon and now, the competition is down to two talented women, Karabo Mathe from Hebron and Berenike Trytsman (Berry) from Cape Town. On Sunday 14 November, Mzansi said goodbye to S’22Kile (S’thuthukile Langa) who unfortunately did not receive enough votes to stay in the competition.

For their first performance of the evening, the Idols SA contestants performed an original song and Karabo was up first. She worked on her song, Hosanna with Kalawa Jazmee boss Oskido and musician Ntsika Ngxanga.

The 22-year-old belted out her new gospel single which left the judges in awe of her performance. Randall Abrahams commended her for “knocking it out of the park”.

Cape Town-based singer Berry stunned the audience and the judges with her single, Ungowami. Berry also delivered an afro-pop-inspired single and incorporated Zulu lyrics into the song. Msaki commended Berry for approaching her single with reverence and respect.

For their second song of the evening, the top two contestants were tasked with singing their audition songs but with the support of the amazing Idols SA band.

Karabo performed Cici’s heartfelt single Ngidinge. Randall praised Karabo’s performance for how far she has come in the competition. He mentioned that although it is great to win, it is special to be on the finale stage.

Berry performed her audition song, Loren Allred’s Never Enough from the film, The Greatest Showman. Msaki loved Berry’s performance and commended her range. Unathi reminded both contestants that they should not let the world get in between their friendship.

MZANSI GUSHES OVER BERRY AND KARABO

Both Berry and Karabo trended on Twitter after the Idols SA show. One tweep praised Karabo’s performance of her new single Hosanna saying the song suits her.

Another tweep wrote: “She is so comfortable, it’s like she has been doing this for a while.”

Praising Berry, one tweep wrote, “Berry is one of the best vocalists in the history of SA Idols!!”.