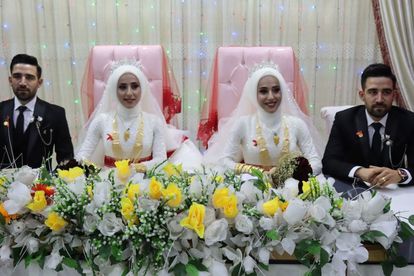 And the couples claim it’s “fate” that brought them together.

Abuzer married Nursel whilst their respective siblings, Gaffari, coupled up with Nurgül. But it was almost impossible to tell either of them apart at the wedding!

The grooms mirrored each other in every way possible – from their haircut down to their suits and even matching wedding rings!

And the brides had everyone doing a double take too – the sisters wore identical make-up, accessories and even the same wedding dress!

Adiyaman Mayor Suleyman Kilinc, who officiated over the wedding ceremony, admitted to being confused about telling the twins apart.

“We had difficulties in the marriage of identical twins. There are 5 minutes between their births. They look alike. We were surprised, this is the first time something like this has happened,” he told Turkey’s Independent.

The couples met each other through family acquaintances, but it was Nursel and Abuzer who first struck up a romance. From there, they played matchmaker with their siblings. Soon their respective families were planning the ultimate wedding!

“We wanted to marry my brother and sister who are twins, thank God our dream came true. We are very happy,” said Nursel.

And they believe it’s fate they crossed paths too. “Being twins is a beautiful thing. Not everyone is lucky enough to experience this. We were born twins and fell in love with twins. It’s fate. It is so exciting,” said Gaffari.

TWINS WANT TO HAVE TWINS TOO!

And it’s not enough to share your wedding day with your identical twin (who is married to your spouse’s identical twin); these siblings are hoping to conceive twin children at the same time too!

“God blessed us, we got married. We are very happy, may God grant us twin children,” Abuzer said excitedly.