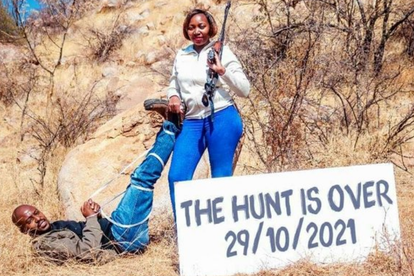 This snap has won the internet. Image via Twitter: @Coll3n21

This snap has won the internet. Image via Twitter: @Coll3n21

Engagement photos are becoming more and more creative as people use these photoshoots to showcase their bizarre and often hilarious personalities. One woman/huntress has hit the nail on the head when it comes to crazy photoshoots and social media users wholeheartedly agree.

Huntress shows off her ‘prey’

These days, engagement photos are way more exciting than actually getting engaged. This is because many couples have decided to use the snaps to tell a hilarious story that is both entertaining and way more memorable than the usual romantic shoots that some couples opt for.

A young South African couple really understood the assignment and produced the craziest engagement photos that has left many local Twitter users with their thumbs up and their bellies aching from laughter.

In the snap that has gone viral on the social media app, the woman, a huntress, can be seen with her new fiancé who also doubles as her “prey”.

Mzansi is absolutely loving it

The post got the attention of many locals who will undoubtedly be looking at ways to spice up their engagement photos in the future.

Many of them laughed out loud at the hilarious meaning behind the well-planned photoshoot while others simply congratulated them on their union:

“Cool picture, but we all know the hunting period is seasonal. I can’t wait to see what you catch next year.”

“I love it, you belong together. Nina same mindset niyi pair, nina a group of 2 that is together as 1”

“Some people did Creative Arts not Arts and Culture at school.”