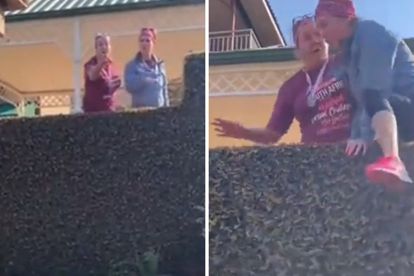 A new video doing the rounds on TikTok and Twitter, shows Afrikaans neighbours getting into an altercation, and the internet is loving it.

The internet is quite amazed at “fight” videos among Afrikaans-speaking people – especially since the “Hugo, bel die polisie” video – went viral last year. Now, two neighbours seemingly decided to do a parody of these altercations.

A Twitter user by the handle, @OzzaT proceeded to upload the video on Twitter, which has been watched over 25 000 times. In the clip, a woman and her neighbours can be heard cursing and threatening one another. It seems they want to “more mekaar” over the littering of cigarette butts.

“Wie de f*k dink jy is jy wat jou stompies oor my f*kk*n muur gooi? (who do you think you are to throw your cigarette butts over into my yard?”) says the woman with the camera.

In the end, the woman with the camera makes her way into the neighbour’s home, after they threaten her “to come over”.

Some have called it “the South African Karen at its finest”.

“Why are they beefing using their inside voice,” said another Twitter user in the comments section.

Others are very curious to know what happened next:

“I need to know what happened next.”

Others are looking at the finer details:

“It’s the Spar Women’s Race Top and medal, for me.”

Others want to pin-point the location of the “fight”:

“This HAS to be in the East rand.”

Others are simply entertained:

“I have been laughing for an hour.”

“As a smoker, those two are making me look bad.”

The Real Housewives of 7de laan?

On This Day in South Africa: What happened on 24 January?