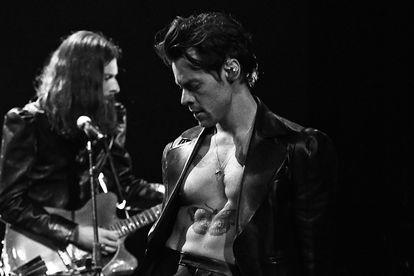 Harry Styles has never opted to play it safe when it comes to fashion. Instead, the singer makes a fashion statement, and his appearance at the 2021 Grammy Awards was of course no different. Styles, who was nominated for various awards, had three wardrobe changes throughout the night and accessorized each one with a matching faux fur boa.

The 27-year-old opened the event (which was a virtual/in-person hybrid) wearing a black leather Gucci suit along with a green boa. The fuzzy accessory was discarded during his performance of his hit single Watermelon Sugar. But that wasn’t the last of the bold, head-turning statement piece.

Styles was also spotted on the red carpet wearing a lavender-hued boa. This time it accompanied a V-neck knit sweater, plaid vest (which his face mask matched), brown flare pants, and white boots. The entire look was also by Gucci.

Styles’ final ensemble for the night featured a black boa, which he paired with an orange jacket.

But it wasn’t all about the fashion for the hit-maker. Styles received the Best Pop Solo Recording award for Watermelon Sugar, which was Styles’ first No 1 hit on the Billboard Hot 100.

“I feel so honoured to be here among all of you,” he said during his acceptance speech. “So thank you so much.”

The former One Direction star is the first of the group to be recognised by the prestigious Recording Academy, following the announcement of the band’s extended hiatus in 2015.

Since embarking on a solo career, Styles has become quite successful on his own.

His 2017 self-titled debut album was critically acclaimed and commercially successful, even though it failed to earn a Grammy nod. But with his sophomore album, Fine Line, Styles has managed to cement his place in Grammy music history.