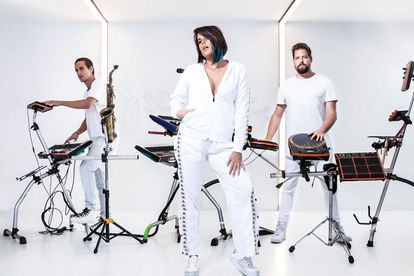 The members of GoodLuck, are, from left, Tim Welsh, Juliet Harding and Ben Peters. Image: Supplied

The members of GoodLuck, are, from left, Tim Welsh, Juliet Harding and Ben Peters. Image: Supplied

The pandemic saw a lot of creatives digging deep in ways they never would have imagined pre-lockdown. In GoodLuck’s case, 10 years into a stellar career that’s seen them tour the world – racking up impressive album sales and tens of millions of Spotify and Apple Music streams – Juliet Harding, Ben Peters and Tim Welsh embraced our collective crazy world by literally switching off.

Powerless, in the Eskom sense of the word, GoodLuck pulled the plug on some of their greatest house music hits, shipped in some of South Africa’s most revered musicians in the form of Shen Winburg, Lumanyano Unity Mzi, Nick Williams, Ross McDonald, Lee Thomson and Ryan McArthur and deconstructed each.

Respectfully socially distanced and sanitised, Ben conducted, Jules sang, and Tim played along with a room rich in talent, unplugged, leaving the songs so many of us already love, stripped bare, ready to be reimagined in ways the group had never-ever considered until they couldn’t go outside to play for a while.

Breaking new ground with ‘Up Close’

In the wake of it all, GoodLuck rose above and beyond their comfort zone and delivered an album’s worth of songs with Up Close that showcase a new side of the group — acoustic and sonically in their element. Together Like Rum & Cola set the tone and what followed were seven more moments of blissful alchemy.

Coupled with that, the group had to figure out just how they were going to fill their days while an unforeseen virus wreaked havoc all around.

“So, when the song came up, we thought let’s do something laid-back and chilled. From there we built the idea up and it landed up becoming pretty much most of all of the GoodLuck hits re-imagined,” Tim explains.

Watch and listen to GoodLuck’s ‘Together like Rum & Cola’

“Don’t rely on electricity for a while and suddenly what you create is powerless, but no less powerful, “Ben shares, with a wink, of GoodLuck’s trip untangling their electronic success.

“It started with Jules at the piano, revisiting Together Like Rum & Cola,” Tim contextualises.

“I was feeling a bit sad, to be honest,” Jules adds.

“Ben then heard it and heard the magic percolating,” Tim recalls. “This was all happening during the initial hard lockdown, so yes, we were sad, but motivated to rise above it all, regardless.”

GoodLuck was so busy doing the thing that they do so well, that they simply got on with it all.

What was originally intended to be a two-week project landed up turning into months. With time on their side, everyone got comfortable.

“We could have done it quicker,” Ben insists. “If only because Jules had worked so fast on the lead single, and it was exquisite as it was, but after two days with the session musicians, we quickly realised the undertaking called for more.”

“Let’s go somewhere where they know how to do this,” was Ben’s instruction. “I didn’t want the responsibility of the recording and the producing, I wanted to wear only one hat and shape what was percolating and turn that into something special,” he recalls.

“It was all too special to stuff up.”

GoodLuck had never worked this way before. Their entire musical journey, up until that point was informed the other way around, meaning GoodLuck do all of it, all of the time. There are no disparate parts. Simply put, it’s a tight, three-part orchestration.

“This was like a blank canvas, along with 11 musicians,” Jules recalls.

After each session, the group was exhausted. Historically, computers had processed all of the day’s data, whereas here, Ben and the band needed to download it all, organically.

“We were in a room with artists who were willing to give a lot,” Tim retells. “So, having to handle these ideas being thrown at you is a different problem than having to come up with them yourself.”

Did the experience affect the group to such an extent that they consider the process again?

“From day one, working with Goodluck, I’ve always approached each track with the widest breadth of each track’s possibility,” Ben shares.

“I trawl, with a big net, whereas Jules is a lot more singular, but you can’t shut that down, you need to hear it and let it wash over you before dismissing any of it. If you don’t like the direction, you can reign it back in, so recording this way was an incredible experience — if only because we had more experts in the room to lean on and the learnings from it are certainly not lost.”

“What this process has highlighted for me is that I want to do an acoustic version of every album we produce from here on out,” Jules reveals. “When you strip a song down, the mood changes; the message changes; it’s completely different and I love that!”

For me, what’s come to the fore is, when we next record, we’ll choose only the very best people to walk the road with us,” Ben says.

“Whether they’re there because they’re a wonderful human being or better yet, a great musician, their addition not only adds huge value and by selecting the best of the best but that’s also when the magic happens, Up Close illustrates that beautifully.

Laidback with masters at work

“On Up Close, because we were working with the cream, we, as a group of three could relax and let these masters do their work,” Ben concludes.

“It was the least stressful album we’ve ever made,” Jules concurs. “The collective creative energy in the room took the pressure off and allowed us to redirect that talent at a drop of a hat to achieve the best result possible.”

By all accounts, reflecting and listening to the finished product, Jules, Ben, Tim and their hired guns not only revealed a new soundscape, but GoodLuck also hit gold in discovering a whole new dimension and possibility when they clean house, unplug and connect with their music’s essence.

Check out the band’s Behind-the-Scenes videos, recording the unplugged album and the journey that lead this new chapter:

Following on from the release of Up Close, GoodLuck will be playing two intimate unplugged concerts at Beyond Phinda Private Game Reserve in early June. The concert will form part of a two-night safari experience, with a maximum of just 32 guests per performance.

Up Close is released independently on their record label, in partnership with The Kartell in the UK.

‘They belong behind bars’: DA on implicated NLC ‘syndicate members’

Did you feel it? 4.6 magnitude earthquake confirmed near SA