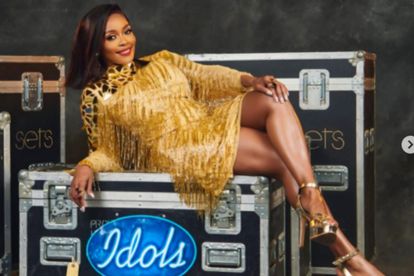 ‘My aim is to not break people’: Thembi Seete on her ‘Idols SA’ journey. Image via Instagram @thembiseete_

‘My aim is to not break people’: Thembi Seete on her ‘Idols SA’ journey. Image via Instagram @thembiseete_

The show announced this week that the rapper is one of the new judges that will be joining season 18.

THEMBI SEETE ON JOINING THE SHOW

Gomora actress and musician Thembi Seete was announced by Idols SA as one of the judges along with rapper and producer, JR Bogopa, as well as returning judge, Somizi Mhlongo this week.

Seete who currently plays the role of Gladys Dlamini in Gomora spoke to True Love about joining the show.

“It feels like someone is about to wake me up and tell me it’s not happening.”

“I’m really excited and over the moon and grateful and [excited].”

Fans of the show were elated when she joined the show last season as a guest judge and were thrilled when she was offered a permanent role in the show.

“I was genuinely having a good time and didn’t think anyone was watching or noticing me so when this came, I just felt like it was all a blessing.”

The TV personality adds that this opportunity came at the right time because she’s always wanted to share her experience in the music industry with the youth.

“This means so much to me because I really wanted an opportunity to speak to young people and share my experiences and knowledge about the industry.”

“I’ve found that most of them don’t really know how to navigate their way in the industry.”

HER ROLE IN ‘IDOLS SA’

The icon says she feels like she’ll be able to help contestants on Idols SA and that the show will give her a chance to share everything about how to be a true artist.

Seete adds that she’s looking forward to seeing authentic singers who will connect to whatever songs they’ll be singing and are present in their surroundings.

“Those are the elements that make a true artist.”

Fans of the singing competition shouldn’t expect her to be too harsh.

“I’m a sister and the aim here is not to break people or make them feel like they can’t do anything.”

“This does not mean that I’m not going, to be honest, but at the same time I really need to empower people.”

“I want to make them feel like they can do anything as long as they set their minds to it.”