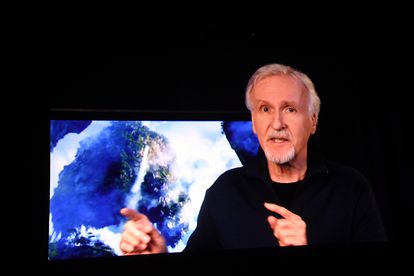 James Cameron, director of the upcoming film “Avatar: The Way of the Water,” appears in a video projected on screen during the Walt Disney Studios special presentation during CinemaCon 2022 at Caesars Palace on 27 April, 2022 in Las Vegas, Nevada. Photo: VALERIE MACON / AFP

James Cameron, director of the upcoming film “Avatar: The Way of the Water,” appears in a video projected on screen during the Walt Disney Studios special presentation during CinemaCon 2022 at Caesars Palace on 27 April, 2022 in Las Vegas, Nevada. Photo: VALERIE MACON / AFP

Disney on Wednesday unveiled the first trailer from “Avatar: The Way of Water,” a long-delayed sequel to the highest-earning movie of all time, which director James Cameron said aims to “push the limits of what cinema can do.”

CinemaCon attendees in Las Vegas were invited to don 3D glasses and return to Pandora, with brief footage showing Na’vi characters swimming beneath the planet’s oceans and soaring through its skies.

“I can assure you it’s been well worth the wait,”

Producer Jon Landau introduced the footage from the film, which will be released in December and is the first of four planned sequels to the $2.8 billion-grossing original from 2009.

Each sequel will be a standalone movie with its own “emotional resolution” but will collectively make up an “even larger, connected epic saga,” said Landau.

Cameron addressed CinemaCon from New Zealand, where finishing touches are being put in place on “Avatar: The Way of Water.”

“We set out once again to push the limits of what cinema can do,”

To reacquaint audiences with Pandora nearly 13 years after the smash hit original, which sparked a 3D wave in Hollywood, the first “Avatar” will be re-released in September.

Movie theater bosses are gathering at Caesars Palace in Las Vegas for their annual meeting, where Hollywood studios bring fresh footage and A-list stars to court the industry.

Marvel Studios boss Kevin Feige kicked off the Disney presentation, telling attendees that planning for “the next decade” of the record-grossing superhero films was well underway.

Attendees also got an extended look at “Doctor Strange in the Multiverse of Madness,” which is out next week, with plot twists tightly under wrap.

It will be followed by two more Marvel films this year — “Thor” and “Black Panther.”

Pixar showed off 30 minutes of “Lightyear,” an origin story for the beloved astronaut from “Toy Story,” voiced by Chris Evans.

The movie, out in June, finds Buzz racked with guilt after marooning his crew of space rangers on a hostile alien planet.

In his bid to save them, he is forced to travel into the future — aided by a cute robotic cat.

The 1930s period piece about three friends who “find themselves at the center of one of the most shocking secret plots in American history,” which purports to be partially based on true events, comes out in November.

ALSO READ: What does Russia’s gas shut-off mean for Europe?