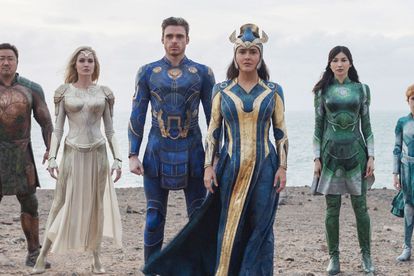 Eternals, the latest Marvel film by director Chloe Zhao, was released in cinemas across the world on Friday 5 November to much hype.

Eternals follows the adventures of 10 super-powered beings who have been sent on a mission to Earth. To their knowledge, the Eternals sole purpose is to protect humans from Deviants. The Eternals are as old as time and are led by Ajak (played by Salma Hayek) who .

“The Eternals, a race of immortal beings with superhuman powers who have secretly lived on Earth for thousands of years, reunite to battle the evil Deviants,” reads the film’s synopsis.

Opening with a wordy explanation, the film prematurely sets high expectations for the audience which might just be its downfall in the end.

The action jumps between the past and present for its entire duration of two hours and 37 minutes…with Salma Hayek’s Ajak character appearing in flashbacks as she was killed off by the villain Ikaris (Richard Madden). This was relatively long for a Marvel movie which includes two post-credit scenes.

The Eternals also celebrates diversity of cultures within the film along with locations such as India, Western Asia, South Dakota and Alaska. These scenes were actually shot in the Spanish Canary Islands of Fuerteventura and Lanzarote, and in parts of southern England.

The cast and diversity was a strong drawcard for the film. However, critics were not as impressed with the Eternals as they were with Denzel Washington’s The Tragedy of Macbeth.

BBC’s Nicholas Barber thought the film was “the most disappointing Marvel Cinematic Universe (MCU) film yet”.

What added to the negative reviews was that the film was pulled from certain countries such as Saudi Arabia and Qatar due to a same-sex on-screen kiss.

While “disappointing” may be taking it too far, one of the issues with the film was that there was just too much going on. It feels as if the writers and director tried to pack too much into one film, leaving the audience scratching their heads to piece things together at times.

Victory not that grand…

The actual “victory” at the end was also not that grand. Viewers are accustomed to Marvel’s elaborate fight scenes which were sorely lacking in the Eternals.

Human-loving Sersi (played by Gemma Chan) is left with all the hard work while some of the other Eternals bail on their “family” or turn against them.

It was interesting that the Eternals seemed to be more human-like than superheroes. In this way, the film is different from most Marvel films, but not necessarily disappointing.

The storyline, humour and plot twists still had the audience glued to the big screen throughout the film.

IS THE FILM WORTH A WATCH?

The strong points of the film outweigh the critical points though and makes it definitely worth a watch. Rotten Tomatoes scored the audience review of the Eternals an 81% which is proof that you should give the film a chance.