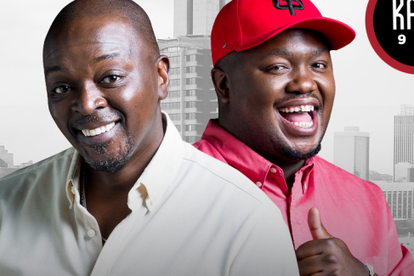 ‘We no longer love it in the mornings’ is a new slogan that resonates with many Kaya FM listeners who sadly misses Thomas and Skhumba on the breakfast show.

The duo, who broke down the seriousness of morning radio bringing in laughter and memorable features, was reshuffled to host a late night show called Last Call from 22:00 – 00:00 weekdays.

Their breakfast show was snatched by Dineo Ranaka and Sol Phenduka from the beginning of July.

As per usual, Thomas and Skhumba have been trending since gracing the airwaves at night. Most listeners that they took with have complained about waiting so late in order to hear their favourite radio personalities, while others complained that the show wasn’t allowing them to sleep because of the segment’s madness accompanied by laughter and good music.

Lisa on Twitter said: “Worst decision ever made by Kaya I must say, haven’t listened to radio since these two left”.

Tall Man Moeketsi cried, “Kaya FM did us dirty by removing Thomas and Skhumba in the morning. I mean Sol is a good vibe but Dineo is not as energised for this”.

Simphiwe also vented, “Whoever is in charge at Kaya959 is clueless emotional idiot. Thomas and Skhumba was the best breakfast show, waking up to them was mega fun, they knew what they were doing. I can bet my last cent that numbers have dropped significantly since this boring show started!!!”