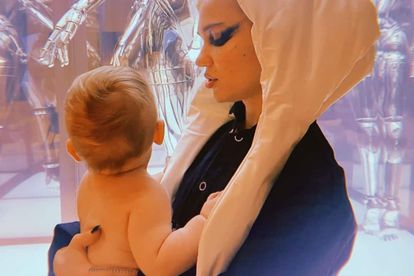 Grimes, aka ‘c’, with her son, X. Image via Instagram @Grimes

Grimes, aka ‘c’, with her son, X. Image via Instagram @Grimes

Elon Musk and Claire Boucher, known by her stage name Grimes and more recently “c”, shared separate pictures of themselves with their son on social media. Baby X Æ A-XII — X for short — has been given a Viking-inspired haircut.

The couple welcomed their first child together in May 2020, and have been allowing fans little glimpses into his life.

They initially named him X Æ A-12, but had to change the name to X Æ A-XII as California laws restricted numbers from being included in legal names. They then replaced the number with roman numerals.

HAIRCUT INSPIRED BY ‘THE LAST KINGDOM’

In January, the indie pop star now known as “c” — her initial and symbol for speed of light — gave baby X a haircut herself. Grimes’s inspiration for the cut was the Netflix series The Last Kingdom.

On her Instagram stories she posted behind pictures of the baby from behind.

“Not sure this haircut went well but he’s a Viking now. Haircut inspired by ‘The Last Kingdom’ on Netflix, which is a masterpiece,” she said.

Taking to Twitter, Elon Musk captioned the picture of him and X tugging at his shirt collar “The Second Last Kingdom”.

Grimes also shared a mom moment, affectionately holding X in her arms, with the caption:

“Tell me of the waters of your homeworld.”

GRIMES HAS BIGGER ROLE IN PARENTING

In an earlier interview, Elon Musk revealed that babies are just “eating and pooping machines”. Grimes has a bigger role in parenting their son at the moment, he told The New York Times.

“Right now there’s not much I can do. Grimes has a much bigger role than me right now. When the kid gets older, there will be more of a role for me,” Musk said.

He explained that when the baby was older he would be able to do more of what he does for his other children, like take them on trips. The tech billionaire has five children with his ex-wife, Justine Wilson: Twins Xavier and Griffin, and triplets Damian, Kai and Saxon.

“I think just doing what I’ve done with my other kids. If I have a trip for Tesla to China, for example, I’ll bring the kids with me and we’ll go see the Great Wall or we took the bullet train from Beijing to Xian and saw the Terracotta Warriors,” Musk told The New York Times.

Dogecoin: The joke cryptocurrency worth billions

Brodie Retallick eager for recall to help blundering All Blacks

‘Sounds like I’m selling Tupperware’: AKA puts his money on United