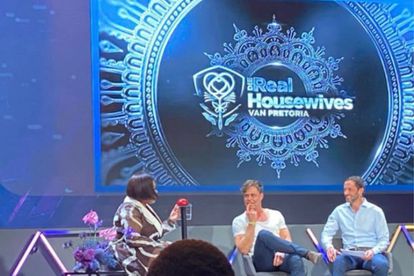 Is ‘Die Housewives van Pretoria’ on the way? Image via Twitter @SbohSibisi

Is ‘Die Housewives van Pretoria’ on the way? Image via Twitter @SbohSibisi

The Real Housewives franchise has been to Johannesburg, Durban and Cape Town and it seems Mzansi may be getting an Afrikaans version set in Pretoria… Taking to Twitter, a tweep revealed that Die Real Housewives van Pretoria is on DStv’s lineup of new content, but it received mixed reactions from other tweeps.

On Wednesday 27 July, DStv hosted an M-Net Showcase, where some of its biggest channels sat down to speak about their upcoming content. The exclusive event was hosted by 947 radio presenter Anele Mdoda.

Taking to Twitter, @SbohSibisi, revealed that an Afrikaans adaptation of the Real Housewives will be hitting Mzansi’s small screen but not much information is available about the upcoming title.

According to the tweet, the series will be set in Pretoria and has been titled, Die Realhousewives van Pretoria.

Following the now-viral tweet, Die Real Housewives van Pretoria received mixed reactions from social media users and many will certainly be tuning in.

“I hope they have English subtitles, I’m watching,” wrote one tweep.

“I’m afraid this is where we might see real money,” wrote another tweep.

“Nobody asked for this.”

“I need the ‘Real Housewives of’ to take a break…”

Real Housewives of Cape Town is the latest Real Housewives franchise in South Africa following the success of Johannesburg and Cape Town. The franchise has also travelled to Lagos, Nigeria and has plans to expand.

Speaking to Glamour in April 2021, Multichoice’s Channel Director of Local Entertainment, Nomsa Philso said there is certainly more to come.