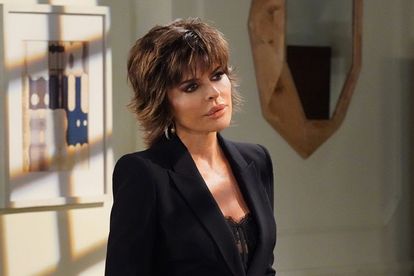 Lisa Rinna has reprised her role as Billie Reed in the ‘Days of Our Lives’ spin-off series ‘Beyond Salem’.
Image via Twitter
@peacocktv

Lisa Rinna has reprised her role as Billie Reed in the ‘Days of Our Lives’ spin-off series ‘Beyond Salem’.
Image via Twitter
@peacocktv

If you are a fan of the soapie Days of Our Lives, you’re in for a major treat!

The long-standing TV drama has officially begun filming it’s spin-off series Beyond Salem which will premiere on streaming service Peacock TV next month.

FAMILIAR FACES BACK IN ‘DAYS OF OUR LIVES: BEYOND SALEM’

And if you’re a loyal viewer of the show, you will surely recognise some of the familiar faces set to make a return to the new show.

One of them being Real Housewives star Lisa Rina, whose popular role as Billie Reed catapulted her into superstardom.

The 58-year-old actress starred in one of the most infamous love triangles of the small screen, alongside onscreen boyfriend Bo Brady and his other on/off love interest Hope.

Lisa — whose daughter Amelia Hamlin is dating Scott Disick — will be joined by other fan favourites too, as teased by Peacock on their social media platforms.

Marlena Evans and her flame John Black, played by Deidre Hall and Drake Hoegestyn respectively, will also mark their return.

Talk about a stellar cast!

So what do all these random characters have in common and how will the Days Of Our Lives: Beyond Salem storyline play out?

According to a first glimpse by Peacock, the plot will centre around the characters’ lives outside of Salem.

A synopsis of the new show reads; “Over a long weekend, John and Marlena travel to Zurich, Ben and Ciara have a romantic getaway in New Orleans, Chad visits some old friends in Phoenix, and Abe, Paulina, Lani, and Eli vacation in Miami.

“All find themselves embroiled in a mystery involving stolen jewels which, in the wrong hands, could cause dire consequences for Salem”.

And Billie is expected to take centre stage in the highly-anticipated soapie.

“It’s a race against time for ISA agent Billie Reed as she crosses the globe in search of this missing treasure.”

‘DAYS OF OUR LIVES’ FANS ARE IN THEIR ELEMENT

Following the news of the new spin-off, viewers took to social media to express their sheer excitement of the TV production.

Take a look at what tweeps had to say…