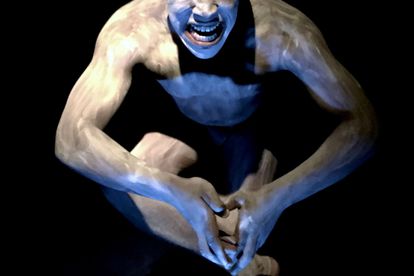 Oupa Sibeko in ‘The Rebirth of Iqhawe’.
Image: Nicola Pilkington

Oupa Sibeko in ‘The Rebirth of Iqhawe’.
Image: Nicola Pilkington

Oupa Sibeko and Nicola Pilkington present their short dance film The Rebirth of Iqhawe at the virtual National Arts Festival in Makhanda from Monday 29 June.

A performing artist and storyteller, Sibeko says he uses performance art to interrogate specific notions in a manner accessible to everyone around him.

The Rebirth of Iqhawe began with the photography exhibition Reeds of Iqhawe, and looks at where we come from and the fragility of human beings.

“I made young boys from my neighbourhood realise that it’s possible to get out, your past doesn’t define your future. I use ritualistic performance and play as methods to engage how people relate to each other and their natural environment,” says the artist from Zuurbekom in Gauteng.

Sibeko urges young artists to truly invest time into their craft, but also notes that “you need to work hard and be prepared to get a lot of no’s, but be determined and driven enough to push through”.

In addition it is important to invest in oneself financially:

“If you are going to sit and wait for funding you will never produce your work”.

Oupa comments on the significance the title of the work by stating: “We are always becoming, we are a different collection of ourselves and forever growing”.

The title The Rebirth of Iqhawe  declares the need to read, write and visualise identity.

The Rebirth of Iqhawe was inspired by Oupa’s photographic series Reeds of Iqhawe which was grounded in his Sotho ancestry.

Co-conceptualist Nicola Pilkington saw the work performed in Johannesburg at The Gallery in Melville and at The Art Room in Parkhurst.

This influenced her to try to translate what Sibeko did with his mind, body and soul onto a film that could be screened.

“At the time, it was just an experiment and we didn’t know what form it would take. The concept came out of the deep desire to collaborate and to play, both in process and in form,” says Sibeko.

Hybridity of the body

Through the medium of video used by Sibeko and Pilkington’s for the virtual National Arts Festival, the body itself is fragmented, collaged and reconfigured to accentuate the hybridity of the body.

“The Rebirth of Iqhawe has been a three-year process and has taken different forms up to this point,” says Oupa.

The first step was filming the work which then premiered as part of an installation at Wits Art Museum in 2017.

In addition, the work had been screened at film festivals around the globe. The list includes: The International Video Art House Festival in Madrid, Instants Vidéo Numériques et poétiques in Marseille and the 6th International Meeting on Video Dance and Video Performance.

Socio-political look at the black body through butoh

“In Rebirth of Iqhawe, the body is a site of making meaning, ideological struggle and performative resistance, emphasis is placed on the body,” says the artist.

The piece is socio-political in the sense that it looks at how society has influenced the black body and mind.

“It is about the self, the black body, the fragility of life and for people to know their space in society begins with knowing yourself”.

The movement vocabulary for the work is greatly influenced by butoh which, according to Wikipedia, is a form of “Japanese dance theatre that encompasses a diverse range of activities, techniques and motivations for dance, performance, or movement”.

According to tricycle.org, this “extreme” avant-garde dance rose out of the ashes of post-World War 2 Japan, drawing on traditions like white body paint.

“This Japanese dance form signifies the body moving like ash, despite it being rooted like a pillar,” says Sibeko.

When asked what the audience could expect on screen, Oupa said:

“The film was conceptualised to be a triptych: To always be experienced over three different screens, three different perspectives. The site of the film starts and ends with the skin and the screen”.

The costuming in this work is considered to be “simple”, as the performer is seen half naked painted white.

“The costume speaks to the vulnerability of the human body and the ritual one has to undergo in healing the body” says Sibeko. The white body paint signifies a “sacred body”.

The track Ocean of Ghosts was a suggestion made by co-conceptualist, videographer and editor Pilkington due to its dreamlike quality.

“The sound becomes an important womb in which the audience experiences the film,” says Sibeko.

Overall the piece remains relevant in today’s time, he believes, as it “reminds people of what makes us human, the importance of nature and nurture, especially in the time we are faced with femicide”.