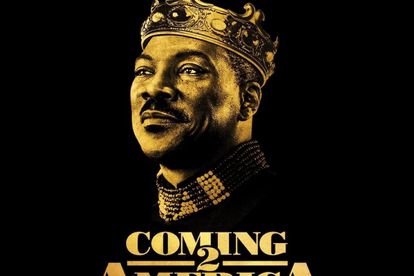 Earlier this month, Def Jam Africa announced the release of Rhythms of Zamunda soundtrack to accompany the release of the film Coming 2 America on 5 March.

ABOUT RHYTHMS OF ZAMUNDA

To assist in telling the story of Coming 2 America, music by African artists have been included in the film.

“It was important for Def Jam Africa to be involved because the first film was so legendary to Africans in the diaspora,” said Sipho Dlamini Universal Music South Africa and sub-Saharan Africa chief executive to Variety.

“The film franchise is tongue-in-cheek but conveys a rich quality of life in Africa. That is reflected in the music on ’Rhythms of Zamunda’,” he continued.

“We wanted to represent some of the sounds that are relevant, impactful and current on the continent,” he added.

Rhythms of Zamunda is a 16-track album crossing genres of amapiano to zouglou-inspired songs.

“We wanted to bring our knowledge of the music from the continent that is coming up and affecting the youth globally,it’s not just Afrobeat,” said Dlamini.

“The fact that Zamunda is depicted as more of a fictional, pan-African country gave the Universal Africa and Def Jam teams some creative licence, too” he added.

‘BLACK AND WHITE’ IS THE LEAD SINGLE

Last month, South African rapper Nasty C and American singer Ari Lennox made magic together from their respective parts of the globe through their hit single Black and White. The song will be the lead single of the Rhythms of Zamunda album.

The music video was shot in both Cape Town and the United States of America and takes listeners on the journey of how simple love can be when you communicate properly and everything is just “black and white”.

You can stream the full album here.

FULL TRACKLIST FOR RHYTHMS OF ZAMUNDA