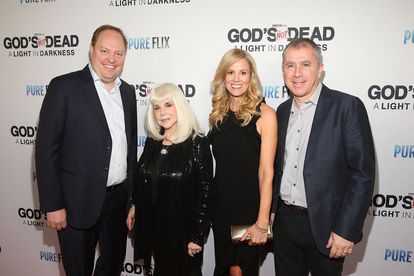 Christian film fans of the God’s not Dead series are set for a revival as Pureflix has announced that God’s Not Dead: Rise Up is on the way.

The announcement was made during a special event for the film franchise in Los Angeles on 13 September 2022.

“This is a new chapter in the ‘God’s Not Dead’ franchise and we can’t wait to share this with all the fans. I’m still humbled, eight years later, that this type of movie and this message resonates with so many people,” says producer and actor David A.R. White, in a statement. White plays Reverend Dave Hill in the Christian franchise.

“The legacy and impact of ‘God’s Not Dead’ is undeniable and I’m so proud and honoured to be a part of this movement.”

Also Read: Here’s when ‘The Woman King’ will be released in SA theatres

“The legacy and impact of ‘God’s Not Dead’ is undeniable and I’m so proud and honoured to be a part of this movement.”

Released in 2014, the God’s Not Dead franchise has grossed more than $100 million worldwide against a budget of $2 million, according to Pureflix.

The films tackle hot-button social issues such as abortion, atheism and politics that concern Christian communities in the United States. Because of its mainstream appeal, compared to most religious content, it has also been the subject of widespread debate because the issues it raises.

According to Pureflix, the next film goes to the heart of its messaging about Christian values in modern politics. The fifth film follows the journey of a retired political spin-doctor who returns for one last campaign, this time to help Reverend Dave Hill run for Congress.

The race pits them both against formidable opponents who want to remove Christian influence on public policy. Is God dead in American politics? Dave struggles to answer this question in this highly anticipated sequel. Dave is a character who appears in all the films, much like Tyler Perry appears as his “Medea” character in a series of films.