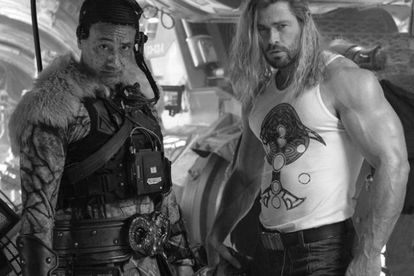 Chris Hemsworth has marked the end of filming Thor: Love and Thunder.

The 37-year-old actor took to Instagram to share a picture from the set of the sequel to Thor: Ragnarok in costume as the crown prince of Asgard.

And Hemsworth, who stood next to the Marvel superhero flick’s director and Korg actor Taika Waititi in the black and white snap, teased that the flick is “bat**** crazy”.

Hemsworth teasing the craziness of the movie comes after Sam Neill confessed he’s puzzled by his role in Thor: Love and Thunder because he doesn’t understand the Marvel characters.

The 73-year-old actor returns to the franchise with a brief appearance as an Asgardian performer playing Thor’s father Odin but finds the Marvel Cinematic Universe to be a “complete mystery”.

Neill – who also portrayed the same role in 2017’s Thor: Ragnarok – said: “I’ve never understood any of the Thor films, in fact, the whole Marvel universe is a complete mystery to me.

“I mean I was standing beside Jenny Morris (on the set of Thor: Ragnarok) and I said, ‘Do you know what planet we’re on?’ To be honest, I was completely baffled.

“I came back and I was baffled again, I did my bit, I don’t know who is playing who exactly because they are sort of swapping roles.”

The ‘Thor: Love and Thunder’ team

Neill will be joined in the flick by Matt Damon, Luke Hemsworth and Melissa McCarthy who will play Asgardian versions of Loki, Thor and Hela, respectively, in a nod to the scene featured in the previous film.

Russell Crowe is also set to make an appearance in the 2022 movie as Zeus.