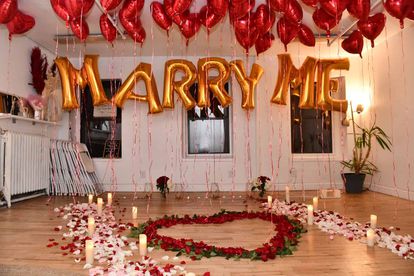 Celebrities have even more pressure than the rest of us mere mortals to come up with the perfect proposal. Image: Adobe Stock

Celebrities have even more pressure than the rest of us mere mortals to come up with the perfect proposal. Image: Adobe Stock

L-O-V-E. Four simple letters that mean so much to so many different people. These are also the very same four letters that form the foundation of a lifetime. A lifetime is a very long time and the following stars had a good start to it with these romantic celebrity marriage proposals.

While on baecation in Mozambique for their seven-year anniversary in 2019, Solo (real name Zothile) stood behind Dineo and pretended that they were taking a selfie. Dineo kept asking him to put his arm around her but for some reason, that just wasn’t happening.

“Lo and behold, he was on one knee behind me, asking me to marry me,” Dineo later shared on her social media. A few months later, the glam couple said “I do” in a jaw-dropping, star-studded wedding and ended with vows that had everyone in their feels.

Solo and Dineo launched their own fashion brand, Port of LNG, in November.

The Skeem Saam actor asked his long-term girlfriend, Kemo, to marry him at his 30th birthday celebration. They are yet to walk down the aisle but when they do, their super cute son, whom they welcomed into the world in October 2019, will be in tow.

When Quinton drove Minnie out to a bush lake house and arranged some of her favourite food, she didn’t think anything of it because it was normal for them to take long drives to spend quality time together.

Even when he got down on one knee with the ring, she thought it was a prank because every time he bought her jewellery, he got would go down on one knee and ask her to marry him. But during a beautiful sunset in late 2016, he looked pretty serious and after crying, she said yes.

The couple welcomed their first child together in November 2020.

Miss Universe 2017 was in for a treat when the former NFL quarterback proposed to her at sunset on his family’s farm in Florida in the United States.

The couple were taking a stroll along the property and stopped next to a small lake. There, Tim had specially made a bench that was engraved with the date on which they first met. He had also organised for Demi’s favourite singer to serenade them with their favourite song, The Wedding Song.

If that wasn’t enough, he secretly flew her family and close friends in to witness the engagement. The guests watched from a distance as Tim got down on one knee and she said yes. Celebrity marriage proposals don’t get much better than that!

Over-the-top Somizi really took things to the top with the ultimate celebrity marriage proposal to his gorgeous bae, Mohale. He took Mohale to the city of love, Paris, for a baecation and ended their fabulous trip by popping the question on the famous Love Lock bridge.

The two started dating in 2017, got engaged in 2018, had their stunning traditional wedding in 2019, and had their fairy-tale white wedding in January 2020.

The marriage has been surrounded by ongoing rumours that it’s near its end, but both Somizi and Mohale continue to deny it.

Despite rumours of trouble in paradise, True Love magazine reported this week that the two are still “very much married and head over heels in love”.

ALSO READ: Simphiwe Dana defends Somizi after he loses it with journalist.