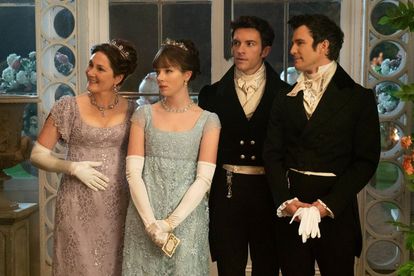 Netflix’s hit series Bridgerton officially releases on Friday 25 March. Here is everything you need to remember from season one and what to expect from season two.

RECAP OF ‘BRIDGERTON’ SEASON ONE

The pair had their troubles but eventually wed, compromised  and had a child together. However, the biggest Bridgerton bombshell yet is that Page will not be returning for season two. The heartbreaking news was explained simply – he was never meant to be in more than one season.

So, season two of the series shifts focus to the love life of Daphne’s older brother, Viscount Anthony and his quest to find the perfect Viscountess. Bridgerton is based on a series of novels by Julia Quinn and each book is based on a different sibling. Season two is therefore based on The Viscount Who Loved Me.

In other Bridgerton family drama – viewers will finally get to know whether the second-eldest brother Benedict (played by Luke Thompson)–  is still secretly hooking up with dressmaker Genevieve Delacroix (played by Kathryn Drysdale)?

Lady Whistledown is the writer behind the hottest gossip of the ton. At the end of season one, she was revealed to be done other than Eloise Bridgerton’s best friend Penelope Featherington.

So, will anyone or everyone find out the secret identity of Lady Whistledown this season?

THE QUEEN AND THE TON

Queen Charlotte (played by Golda Rosheuvel)  is determined to figure out the identity of Lady Whistledown and she is not likely to stop this season.

Will she name her diamond of this courting season?

The Featheringtons were much at the centre of gossip last season as they hosted Miss Marina Thompson at their home. Thompson was there to find a husband but when it was revealed that she was already pregnant with her true love’s child, she wanted to run off and find him.

Tragedy struck at the end of season one when Sir Phillip Crane (played by Chris Fulton) arrived to inform Marina that her love—his brother— lost his life in battle. Marina then decided to marry Sir Phillip.

Will she make an appearance this season?

The Featheringtons faced more tragedy when Lord Featherington’s (Ben Miller) gambling debts finally caught up to him when he was murdered by his bookkeepers. This has left Lady Featherington and her daughters Prudence, Phillipa and Penelope in financial distress.

Netflix’s teasers and trailers revealed that Kate Sharma, played by Simone Ashley would be Anthony’s love interest this season. However, their union is much more complicated than it was made out to be.

Will Anthony ever truly get a love match? Or will be prioritise his roles and responsibilities as the Viscount?