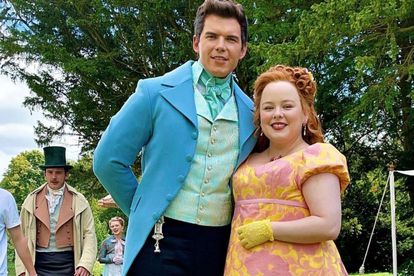 ‘Bridgerton’ season three focuses on the love story of Penelope and Colin. Image via Instagram @bridgertononnetflix.

‘Bridgerton’ season three focuses on the love story of Penelope and Colin. Image via Instagram @bridgertononnetflix.

Nicola Coughlan, who plays Penelope Featherington on Netflix’s Bridgerton, revealed that season three of the hit series will focus on her character’s love story with Colin Bridgerton during Sunday’s FYSEE panel.

THE LOVE STORY OF PENELOPE AND COLIN

Bridgerton is based on a series of novels by American author Julia Quinn. Season one of the series was based on Quinn’s book The Duke and I. So, the season followed Daphne Bridgerton’s Phoebe Dynevor) love story with Simon (Regé-Page Jean).

Season two was based on Quinn’s book – The Viscount Who Loved Me. So, season two followed Daphne’s older brother Anthony’s (Jonathan Bailey) love story with Kate Sharma (Simone Ashley) but season three is not following the third book.

Lady Whistledown announced that the third season of the hit series will focus on the love story of Penelope Featherington and Colin Bridgerton. This is the subject of the fourth book – Romancing Mr Bridgerton while the third book focused on Benedict Bridgerton’s love life.

Penelope has always had a big place in her heart for Colin but at the end of season two she overhears Colin say he would never marry her. So, where does this leave the pair?

Hannah Dodd, will be replacing Ruby Sokes as Francesca in season three. Variety reports that Ruby exited the series after she landed a lead role in Netflix’s Lockwood & Co.

The series creator Chris Van Dusen stepped down as showrunner after season two. Jess Brownell is now the new showrunner.

“Bridgerton will always have a special place in my heart and I think I did what I set out to do,” he said to Radio Times in March.

“The fact that this show has become Netflix’s biggest English language speaking series ever is something I’m incredibly proud of, and something I’ll always be incredibly proud of. But at the end of the day, you know, it was time for me to move on, and hopefully create that magic again in the near future,” he continued.

ALSO READ: ‘Bridgerton’: A look at the South Asian representation in season two