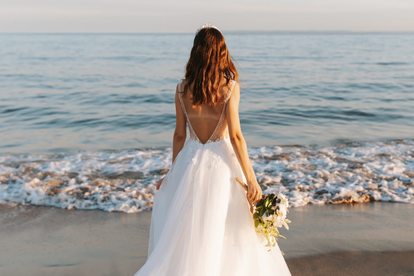 If you didn’t know by now, brides take their special day very seriously. One bride in particular means business. Naturally, she took some time to include some important people in her day and giving the opportunity to RSVP. While they did RSVP, they didn’t show up as promised. And then she did the completely unexpected…

Weddings are known to cost man couples an entire arm and leg. From the seating to the food and even the thank you gifts, the costs for everything can skyrocket. This is why RSVP’ing, when sent an invitation, is an integral part of any special day.

A bride and her groom, however, lost a big amount of money when some of their guests RSVP’d to witness their union and decided not to show up. This is when they made the drastic but somewhat understandable decision to charge the guests who said they would but didn’t attend the special day.

Taking to Twitter, one shocked user posted a snap of the invoice that was sent to the no-show guests Doug and Dedra with the caption:

“I don’t think I’ve ever seen a wedding reception invoice before lol.”

The invoice shows that the two guests who did not attend were charged $240 (around R3951). It also states:

“This invoice is being sent to you because you confirmed seat(s) at wedding reception during the Final Headcount. The amount above is the cost of your individual seats. Because you didn’t call or give us proper notice that you won’t be in attendance, this amount is what you owe us for paying for your seats in advance.”

Meanwhile, tweeps have their say:

The post received over 7 700 likes and hundreds of comments from netizens who shared their thoughts about what they would do if they were the bride who was stood up or the guests who decided not to show at the last minute. Read some of their comments below:

“I understand being upset about no-show guests for a small wedding but sending an invoice is too much.”

“They aren’t your friends if you can’t determine if they are flakey or not. This invoice is wack. They could have been in a car accident or had sick kids. I wouldn’t pay this bill.”

“Stop spending so much on weddings. This is so stupid. Shit happens. Sending an invoice is incredibly tacky. If you can’t afford your wedding, make it cheaper. So dumb.”

“It’s tacky to pull a no show. Have you ever paid for a wedding?”