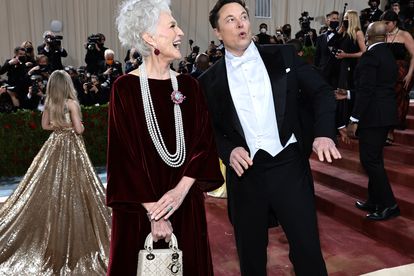 Maye Musk and Elon Musk attend The 2022 Met Gala Celebrating “In America: An Anthology of Fashion” at The Metropolitan Museum of Art on 2 May 2022 in New York City. Image: Jamie McCarthy/Getty Images/AFP

Maye Musk and Elon Musk attend The 2022 Met Gala Celebrating “In America: An Anthology of Fashion” at The Metropolitan Museum of Art on 2 May 2022 in New York City. Image: Jamie McCarthy/Getty Images/AFP

The South African-born billionaire Elon Musk and his mother, Maye attended the 2022 Met Gala event at the Metropolitan Museum of Art in New York.

Musk, who recently bought Twitter, previously attended the event with his ex-girlfriend, Grimes. This is the first time Tesla’s CEO stepped out in public after he bought the social media platform, Twitter.

As reported by The South African, Musk, the world’s richest man, paid a staggering $44 billion for the social media platform. That equated to around R690 billion at the time.

“My goal, assuming everything gets done, is to make Twitter as inclusive as possible and to have as broad a swathe of people on Twitter as possible,” he told La La Anthony according to Page Six. “And that it is entertaining and funny and they have as much fun as possible.”

The Met Gala is regarded as fashion’s biggest night with some major A-list stars dressed according to the theme: “In America: An Anthology of Fashion”.

Musk was therefore asked about his outfit for the event.

He later said that he feels great to attend the event.

“It’s exciting to see all these looks. And what we have here is the most talented people in style and fashion – and it’s the pinnacle of their work. I’m honored to be here, and it’s lovely.”

Meanwhile, Maye was dolled up in a Dior gown, and cords of pearls draped around her neck.

Watch: Musk and his mother on the red carpet