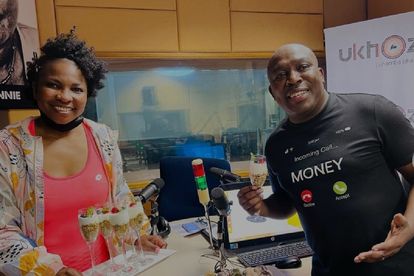 DJ Sgqemeza along with two producers, Mandla “Njinji Wami” Magwaza and Babheke Mthethwa did not show up to the studio on Wednesday 18 May.

Announcing the absence of her co-workers, Buthelezi said: “The rest of the team is on a break,” Isolezwe reports.

While it is not clear why the three workers have been suspended, Gugu Ntuli, SABC group executive corporate affairs and marketing, said the suspension is pending an internal investigation.

“These members are the host and two producers of the show. Management will not discuss this matter further as it is an employer-employee relationship governed by the corporation’s policies,” she continued.

Although DJ Sgqemeza has confirmed his suspension from the station, he has been posting cryptic tweets.

In one of them, he simply commented “oh” on an Isolezwe tweet about the suspension. In another post on Wednesday, the club DJ shared a video of himself at the Ukhozi FM studios with the caption “muted”. The video, which shows him speaking in the studio, has no sound.