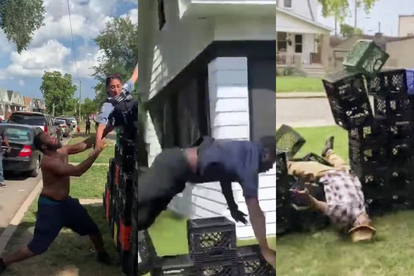 People across the globe having been left both laughing out loud and nursing their injuries after a dangerous challenge went viral on social media app TikTok. The challenge which is called the “Milk Crate Challenge” saw people attempting to successfully climb a pile of stacked milk crates with hilarious results.

The challenge has now been banned by TikTok amid health concerns for those involved.

These last few weeks have brought along a number of video clips showing people trying to master something called the “Milk Crate Challenge.” While it’s uncertain where the challenge originated, many people across the world have found themselves attempting to master their balance while climbing to the top of a stack of unstable crates.

The various hilarious clips that resulted in many people crashing painfully to the ground have now been banned by social media application TikTok where it seemingly got most of its attention.

According to TechCrunch, a spokesperson from the company issued this statement:

“TikTok prohibits content that promotes or glorifies dangerous acts, and we remove videos and redirect searches to our Community Guidelines to discourage such content. We encourage everyone to exercise caution in their behavior whether online or off.”

The decision comes after healthcare workers raised their concerns about the dangerous challenge that not many were able to execute without injuring themselves. Since getting banned, users are now no longer able to search for videos of people taking part in the challenge on TikTok without getting the “no results found” notification.

Milk Crate Challenge: Meanwhile, the net reacts to the news

“That’s good. I saw a woman broke her arm in 2 places very badly, the hospitals are crowded and backed up. I bet she had to sit awhile in pain.”

“Viral videos are fun, but a broken neck is not. Doctor warns against #milkcratechallenge.”

ALSO READ: Viral Milk Crate Challenge may be the dumbest thing on the internet [watch]

SPCA reunites pets with their families after the Boksburg explosion