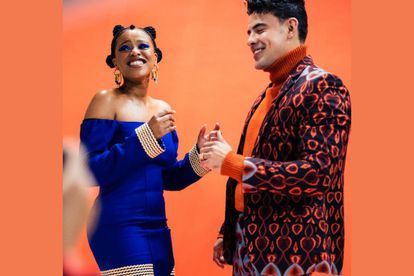 The second season of South African drama series Blood & Water officially released on Netflix on 24 September and one of the most shocking revelations in the series is the brewing romance between arch-enemies Wendy and Chris.

Natasha Thahane, who is also known for being the girlfriend of Orlando Pirates player Thembinkosi Lorch,  plays the role of the studious Wendy Dlamini on Blood & Water. In an unexpected twist of events, Wendy begins to fall for her arch-enemy, Chris, played by Arno Greeff.

Here is a look at Natasha Thahane as Wendy Dlamini.

In the Blood & Water storyline, Chris identifies as pansexual. Pansexual is when a person is attracted to people regardless of their sex or gender identity. For most of the season, Chris has both a girlfriend and a boyfriend, who attempt to make it work for him.

However, Wendy Dlamini later catches his eye as they slowly open up to each other. How does the romance start? How far does the pair go? Well, you’ll have to watch season two for the answers.

Before you binge season two, here is a recap of season one.

TWEEPS WEIGH IN ON CHRIS AND WENDY

Tweeps seem to love the idea of Chris and Wendy together.

WHAT IS NATASHA THAHANE’S RELATIONSHIP STATUS?

Since they were first spotted on “baecation” in Zanzibar, Natasha Thahane and Thembinkosi Lorch have been dribbling Mzansi with subtle hints of their relationship being on and off. Although Lorch previously said he was single and implied he was ready to mingle, it seems he and Natasha are still in play.

The Orlando Pirates player spoiled the actress with a big gift for her 26th birthday on 25 September.