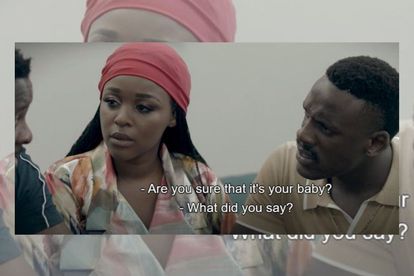 The Wife viewers expected Mqhele (Bonko Khoza) to kick Hlomu to the curb when his brother – Qhawe revealed that he slept with his wife.

They are now wondering if all the brothers are also infatuated with her as they’ve all forgiven her for betraying her husband and the family.

HAS MQHELE REALLY FORGIVEN HIS WIFE?

The Wife fans are surprised that Mqhele is forgiving his wife – Hlomu for having unprotected sex with her brother-in-law Qhawe.

Qhawe (Kwenzo Ngcobo) revealed in last week’s episode (17 March) that not only did he sleep with his brother’s wife but he impregnated her.

Hlomu (Mbali Mavimbela) admitted that she’s pregnant with a Zulu baby but didn’t detail who the father is.

She and her husband haven’t slept together since her last miscarriage.

Fans of the show were worried that Mqhele would physically abuse his wife as he did in season one when he found out.

WHY ZANDILE AND MANDISA HATE HLOMU

Viewers are also protective of fan-favourite character Hlomu and hate the way Zandile and Mandisa have mistreated her.

Zandile (Khanyi Mbau) and Mandisa are jealous of the way the Zulu brothers love Hlomu and care for her.

They are also wondering why they are still protective of her when Qhawe revealed that he slept with her.

The Zulu brothers are appreciative of the way Hlomu took care of them and the children when Zandile was behind bars.

ALSO READ:‘I like her and approve of her’: Dudu Busani on Naledi ‘The Wife’ casting

“Vele, a woman who sleeps with another man is no longer yours, maybe she never was yours and will never be yours.”

“The same person that kicked her into a miscarriage? We must learn from him?”

“Zandlie is starting to bore me with the whole Hlomu hatred nonsense.”

“The same friend she’s pouring her heart to and co-signing the hate is the same friend who didn’t take care of her kids and almost ruined her chances of freedom.”

“They both can go jump maan.”

BACK TO SCHOOL: Scholar transport safety for children on focus